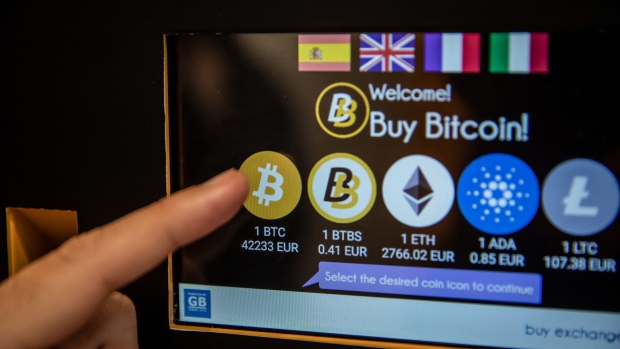 A customer selects Bitcoin for purchase on the screen of a cryptocurrency automated teller machine (ATM) in Barcelona, Spain, on Wednesday, March 9, 2022. Bitcoin dropped back below $40,000, erasing almost all the gains sparked by optimism about U.S. President Joe Biden’s executive order to put more focus on the crypto sector. Photographer: Angel Garcia/Bloomberg , Bloomberg

(Bloomberg) -- The Bank of England wants authorities to beef up the global framework for regulating crypto currencies to prevent them from threatening wider financial stability.

The BOE’s Financial Policy Committee suggested the role of prudential and market integrity regulators should be expanded and their coordination increased, according to a record of its meetings on March 9 and 18, which were released on Thursday.

The central bank also said, Sam Woods, the BOE’s deputy governor, has written to banks warning them that the longer-term treatment of the assets is likely to differ from the current framework.

The current size of the crypto-asset market has surged to $1.7 trillion compared with just $0.13 trillion in January 2019, exposing the industry to heightened regulatory attention. The committee will make recommendations to the U.K. Treasury on adapting the remit for supervising such assets, many of which are beyond the scope of the Financial Conduct Authority.

“Enhanced regulatory and law enforcement frameworks are needed, both domestically and at a global level,” the BOE committee said.

While the direct risk to the U.K. financial system is limited for now, stability risks may emerge if the pace of growth continues and the assets become more entrenched in the wider system, the BOE said.

For now crypto is still a drop in the water in the $469 trillion global financial system, making up just 0.4% of the total amount, according to the BOE.