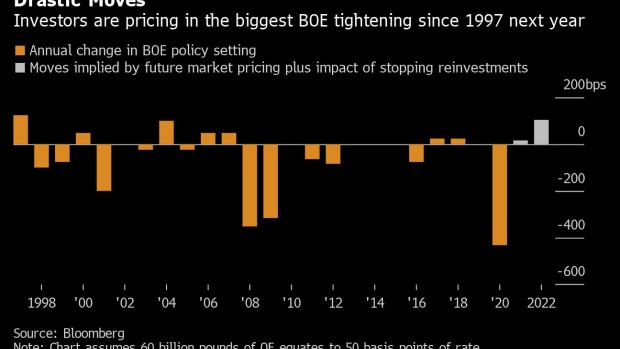 A city worker walks in view of the Bank of England (BOE) in London, U.K. Photographer: Jason Alden/Bloomberg , Bloomberg

The Bank of England may be on course to unleash one of the most aggressive monetary tightening cycles this century just months after the U.K. emerged from the Covid-19 recession, if investor bets are to be believed.

Following a rapid jump in bets on BOE action, spurred further on Monday by comments from Governor Andrew Bailey, pricing currently implies officials will raise interest rates to 1% by the end of 2022 -- 90 basis points above current levels.

The total impact is even higher. Under guidance released in August, the central bank could stop reinvesting bonds held under its quantitative easing program once borrowing costs reach 0.5%, if economic circumstances allow.

If the pause kicks in immediately, around 37 billion pounds ($51 billion) of bonds will fall off the BOE’s balance sheet next year. That is the equivalent of 31 basis points of rate hikes, using a rule of thumb suggested by previous Governor Mark Carney.

That would take the total tightening to at least the equivalent of about 121 basis points of rate increases in just over a year, just shy of the BOE’s previous two biggest cycles starting in 2003 and 2006.

To be sure, the actual impact of the run off is still unclear -- the BOE suggested in August that shrinking the balance sheet may have a smaller impact on monetary conditions than expanding it.

But with another 35 billion pounds of gilts held by the BOE due to expire in 2023, and outright debt sales set to start once interest rates hit 1%, the full extent of tightening could be even higher.