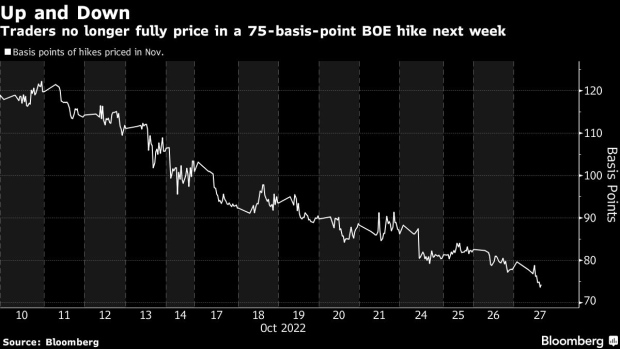 The facade of the Bank of England (BOE) in the City of London, UK, on Monday, Oct. 17, 2022. The Bank of England said it was restarting its corporate bond-selling as it looks to return to normality in the wake of a sustained selloff in UK assets. Photographer: Jason Alden/Bloomberg , Bloomberg

(Bloomberg) -- UK traders are scaling down expectations for interest rates as the government charts a course for austerity to fix public finances.

Money markets are wagering on less than 75 basis points of hikes next week, according to interest-rate swaps tied to BOE policy dates, marking a sharp turnaround from a month ago when traders bet on as much as two percentage points of increases. The bank rate is expected to peak below 5% next year compared to over 6.25% last month.

“It’s not a big surprise to see short-dated rate expectations rallying,” said Mark Dowding, chief investment officer at Bluebay Asset Management. “It seems like the BOE could only raise by 50 basis points” at the next meeting, he said.

The change of sentiment follows last month’s UK market upheaval, stoked by an unfunded, and ultimately reversed, tax-cut plan which led to the downfall of Liz Truss’s cabinet.

Investors have been reassured to a degree by new Prime Minister Rishi Sunak and Jeremy Hunt, the Chancellor of the Exchequer, who have signaled spending will have to be cut sharply to keep borrowing from spiraling and delayed their fiscal plan announcement until after the BOE meeting.

Bluebay’s Dowding said that with Sunak planning to “completely re-do the fiscal plan” it’s not clear that the Bank of England has to be more hawkish than before its September meeting, especially with the pound “also recovering.”

The pound weakened from a six-week high, dropping 0.4% to $1.1576 on Thursday amid broad dollar strength. UK bonds rose, with yields on 10-year bonds falling by 1 basis point to 3.57% -- near the lowest levels since the mini-budget.

Expectations for a slower monetary policy tightening pace increased further after the Bank of Canada reduced the pace of its rate hikes for a second consecutive month on Wednesday.

“We think the implications for monetary policy are modest -- a 75-basis-point hike is still the most likely outcome,” said Bloomberg Economics’ Ana Andrade. “We see the pace of tightening slowing from December.”

--With assistance from Libby Cherry.

(Updates with analyst and fiscal details, from third paragraph)