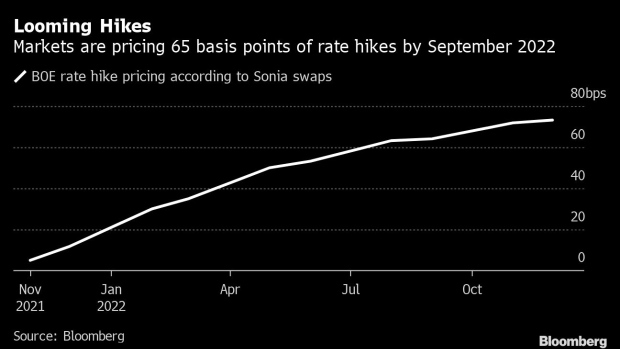 A Bank of England interest-rate increase would hurt a fifth of existing mortgage holders, heaping misery on households already struggling with higher food and fuel costs.

More than 21% of outstanding residential mortgages in the U.K. have variable interest rates, meaning the cost of repayments changes when the benchmark lending rate changes, according to data through June from the BOE and Financial Conduct Authority.

The figures are one issue that may give policy makers reason to pause before raising interest rates for the first time since the end of the pandemic. While money markets anticipate an increase by the beginning of next year, surging inflation along with a tax increase and the withdrawal of key government benefit programs already are tightening consumer finances and draining momentum from the recovery.

“When you have such a big hit on the fiscal side already, does the BOE want to compound the problem?,” asked to Geoffrey Yu, a senior strategist at Bank of New York Mellon who analyzed the numbers. “Do you want interest rates to be straw that breaks the camel’s back?”

Money markets have priced in a rate rise of at least 12.5-basis-point in December, which could increase payments on a 200,000-pound ($271,960) loan by 250 pounds a year. While that sum alone is small, it adds to a big increase in energy costs starting this month and a hefty tax increase taking effect in April.

Mortgage rises will hurt low-income renters who are likely to see payments go up as landlords pass on costs, said Neal Hudson, founder of Residential Analysts, a market research company. “That’s where we’ll see the bulk of the impact,” he said. “It will constrain affordability for people who are looking to buy.”

Money markets are betting that the BOE will raise rates by a cumulative 30 basis basis points by February and take the bank rate to 0.75% by September 2022. The outstanding value of all residential mortgage loans was 1.6 trillion pounds at the end of June, nearly 5% higher than a year earlier, according to the FCA.