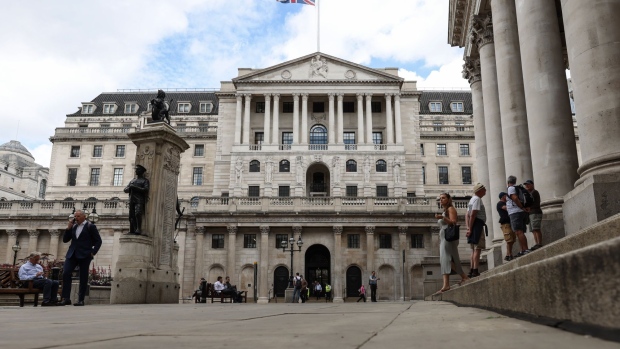 (Bloomberg) -- A majority of Bank of England policy makers may now believe that the minimum criteria for tighter monetary policy has been met, according to HSBC.

Last week, Governor Andrew Bailey revealed that the Monetary Policy Committee was split 4-4 at their August meeting on whether there was clear evidence that the economy is eliminating spare capacity and achieving the 2% inflation target “sustainably.” The BOE had previously said it would keep policy on hold at least until those conditions had been met.

The MPC reverts to nine members this month, with the recent appointment of Huw Pill as chief economist.

In a note published Monday, Elizabeth Martins, senor economist at HSBC, speculated that Pill could join Bailey and other hawks on the question of conditions, tipping the balance 5-4 in their favor. Catherine Mann, who will also make her debut on the MPC, is more likely to maintain the dovish stance of her predecessor, Gertjan Vlieghe, Martins said. However, the shift doesn’t mean a rate increase is coming soon.

“Even if every single member believes the conditions had been met, that would not imply a rate rise is imminent,” Martins wrote. “The guidance is that the conditions were a necessary requirement for tightening but not an automatic trigger.”

HSBC expects that February is the earliest likely move for higher rates, since the situation about Covid-19, inflation and unemployment will be more clear by then. The bank sees the first 15 basis-point rate rise in May 2022 followed by a 25 basis-point rise in November 2022.