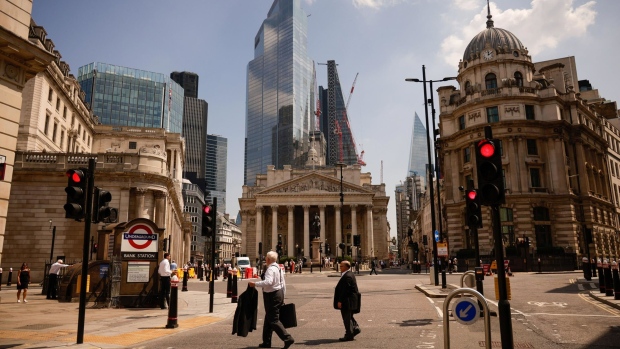 Pedestrians walk near the Bank of England, on so-called 'Freedom Day', in the City of London, U.K., on Monday, July 19, 2021. Boris Johnson's plan to get the U.K. back to normal is in disarray, with Covid-19 cases rising the most in the world and a public outcry over the prime minister's perceived attempt to dodge isolation rules. , Photographer: Jason Alden/Bloomberg

Governor Andrew Bailey was pretty explicit about the rising path for the Bank of England’s policy rate. Traders have already priced this in, with a steep track through next year, but they may have to reassess when the economic fallout from simultaneous tightening on the monetary and fiscal fronts become clear.

Traders are betting that the bank will start raising rates in the final months of 2021, and that the benchmark will reach 1% by end-2022. And there’s no misreading Bailey’s words when he said the central bank will “have to act” to curb inflation. Yet this comes just as fiscal drawstrings are tightened too. Chancellor of the Exchequer Rishi Sunak is on course to raise taxes and cut spending to control the budget deficit.

That’s a double whammy the economy can ill afford. Already, figures released this month showed the economy grew less than expected in August following an unexpected drop in output the previous month.

It’s also doubtful that the supply-chain and commodity-price inflation that the economy is experiencing will be influenced by monetary policy. Natural-gas storage levels won’t be affected by U.K. interest rates -- unless it leads to a substantial amount of demand destruction. And that’s not something Bailey wants to see.