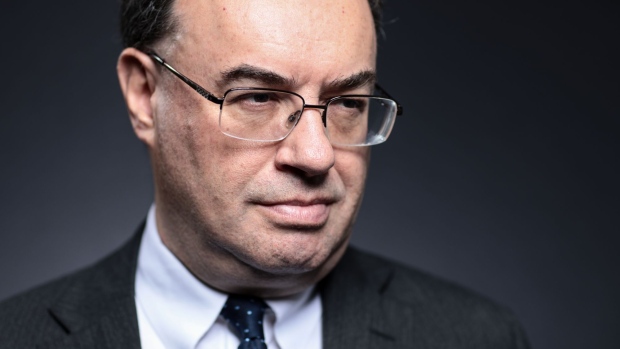 Andrew Bailey, chief executive officer of the Financial Conduct Authority, poses for a photograph in London, U.K., on Thursday, July 27, 2017. Libor, the benchmark underpinning more than $350 trillion of financial products, will be phased out by the end of 2021, as U.K. regulators and banks look to replace the scandal-tarred indicator with a more reliable system. Bailey, said Thursday that the rate isn't sustainable because of a lack of transactions providing data. Photographer: Simon Dawson/Bloomberg , Bloomberg

(Bloomberg) -- Bank of England Governor Andrew Bailey said the world’s effort to shift away from using fossil fuels could spark inflation if it’s done in a disorderly way, highlighting the risks involved with greening the economy.

That shift, which he said climate science suggests is needed to protect the Earth’s atmosphere from bigger harms in the decades ahead, will be an opportunity for some industries and change the way goods like steel, cement and electricity are used.

His remarks were aimed at spurring early action by investors and corporate executives to clean up the emissions blamed for causing global warming.

“A disorderly transition, where more severe policies are introduced later in the horizon to compensate, could result in both lower growth and higher inflation from rising energy and materials costs in the economy,” Bailey said in a speech at an event hosted by Reuters on Tuesday.