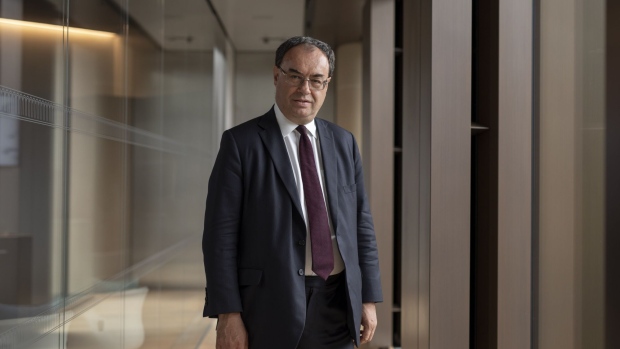 Andrew Bailey, chief executive officer of Financial Conduct Authority, poses for a photograph following a Bloomberg Television interview in London, U.K., on Monday, Sept. 16, 2019. The European Union should urgently reconsider its plan to prohibit some trading in London if a no-deal Brexit occurs next month, according to the U.K.'s top market watchdog. , Photographer: Jason Alden/Bloomberg

(Bloomberg) -- Bank of England Governor Andrew Bailey said the independence of central banks hasn’t been eroded by their coordination with governments to help economies through the coronavirus crisis this year.

Emergency monetary policy stimulus has pushed down sovereign yields and helped governments to fund huge spending on aid for businesses and workers. That’s led to accusations of monetary financing, or the direct financing of governments by central banks, something that Bailey has previously denied is taking place.

“Central bank independence is crucial,” he said in an online Group-of-30 seminar on Sunday. “The good news from all the evidence I see is that it’s holding well.”

Bailey also said independence was a key part of the success of monetary policy action on markets this year.

“I don’t think we could have gone big and fast in the way we did, to seek to bring down rates across the curves, and to do so without a risk premium emerging if there was any question about our independence,” he said.

Bailey also reiterated his view that U.K. output was probably about 10% lower at the end of the third quarter than it was at the start of the year.