Bank of England Governor Andrew Bailey issued a stark warning to those investing in cryptocurrencies: “Buy them only if you’re prepared to lose all your money.”‘

In response to a question about financial stability, Bailey said the central bank was well positioned to respond to any threats that might arise. However, he objected to the use of the phrase cryptocurrency and took the opportunity to push back on their growing popularity.

“I’m afraid crypto and currency are two words that don’t go together for me,” he said at a press conference Thursday. “They have no intrinsic value.”

Bailey has long been dismissive of the assets, and his comments follow yet another period of speculative excesses for a market Nouriel Roubini once described as the “mother of all bubbles.” 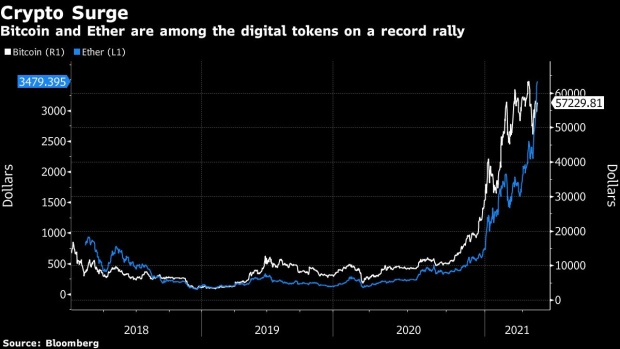 While in the past, trillions of dollars in stimulus by governments and central banks might have triggered a rush into gold for the inflation-wary and risky stocks for the intrepid, a deluge of cash this time round is flooding into the crypto market. It’s even pushed up the price of digital tokens previously considered a joke, like Dogecoin.

The BOE last month said it would join forces with the U.K. Treasury to weigh the potential creation of its own central bank digital currency, joining authorities from China to Sweden exploring the next big step in the future of money. If approved, the U.K.’s digital currency would exist alongside cash and bank deposits, rather than replacing them, they said.