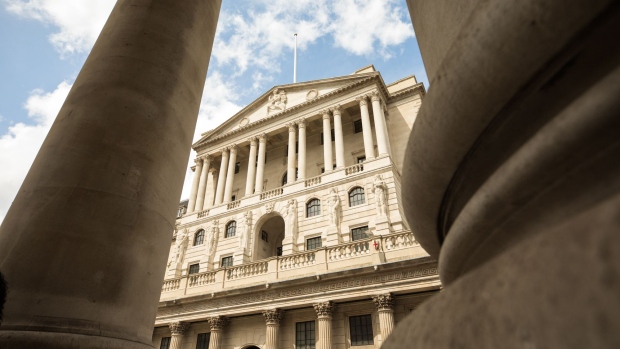 The Bank of England (BOE) building stands in the City of London, U.K., on Monday, July 30, 2018. The BOE is widely expected to raise the rate to 0.75 percent, the second hike since November. , Bloomberg

Bank of England Chief Economist Huw Pill said the UK’s government’s fiscal announcement and the market reaction that followed it requires a significant monetary policy response, but the best time to assess and react to their impact is at the institution’s next meeting in November.

Speaking at an event on Tuesday, Pill said Chancellor of the Exchequer Kwasi Kwarteng’s program of tax cuts had caused a significant repricing of market assets, which proved a challenge to the bank’s inflation goal. The fiscal policies themselves will act as stimulus for demand, he said.

“It’s hard not to draw the conclusion that all this will require a significant monetary policy response,” Pill said.

Still, he appeared to push back against calls for emergency BOE action, saying the proper vehicle for assessing the news is through the banks regular forecasts, due to be released at the next meeting in November.

He also said the bank’s program of government bond sales should go ahead as planned next week if the market repricing stays orderly, as has been the case in recent days.

Pill said it is better to run monetary policy with a considered, low-frequency approach. Before November, the BOE is relying on communication, which relies on confidence in the UK economic framework, Pill added.

The pound held onto earlier gains as Pill spoke, trading up 0.9% around $1.0786 as of 4:10 p.m. in London. Meanwhile, money markets ramped up wagers on future tightening, pricing in close to four percentage points more by May. That would take the BOE’s key rate beyond 6%, from 2.25% now.

The comments come after Kwarteng’s mini-budget, announced Friday, sparked a two-day rout in UK assets that pushed the pound to a record low against the dollar and sent government bonds spiraling.

The reaction also sparked speculation the BOE would have to announce an emergency rate increase to stem the fallout.

In the event, the BOE and the UK Treasury both issued statements to calm financial markets, with the central bank saying it was monitoring them “very closely” and that policymakers “will not hesitate to change interest rates by as much as needed to return inflation to the 2% target sustainably in the medium term.”

That statement also said the BOE would make a “full assessment” of the government’s budget plans in November. Investors are currently pricing in about 160 basis points of hikes at that meeting, more than three times the move announced last week.

Meanwhile, the Treasury said it would publish a medium-term fiscal plan on Nov. 23, alongside a forecast by the government’s budgetary watchdog that it declined to ask for alongside last week’s statement.

Pill said those moves were encouraging, welcoming the “earlier than envisaged” statement with the full “external independent scrutiny” of the Office for Budget Responsibility. He also urged the government to support Britain’s institutions, after a series of political attacks on the central bank, the fiscal watchdog and the Treasury.

“It is crucial that the underlying macro policy institutional framework remain credible,” he said. “It is important that all actors in that are both respected in terms of what their responsibility is and their objective and intentions are. In that respect the announcement from the Treasury yesterday was positive.”

Pill added that government subsides to help households and businesses with energy bills were likely to have made its August forecast for a recession redundant. That in turn had “freed monetary policy to do its job to address these longer-term dynamics,” such as evidence of a tight labor market and high inflation expectations.

“That freedom has to be used as those inflationary pressures are there,” he added in comments that reinforced the point that the BOE is prepared to raise rates aggressively. “I am happy to be unpopular.”

Pill hit back against criticism that the BOE was falling behind the Federal Reserve and other central banks, saying it was not in a “race” to tighten policy. “Markets are sometimes uncomfortable with that but central banks should do the right thing for their jurisdiction,” he said. “Asset market moves will need to be seen in that context.”