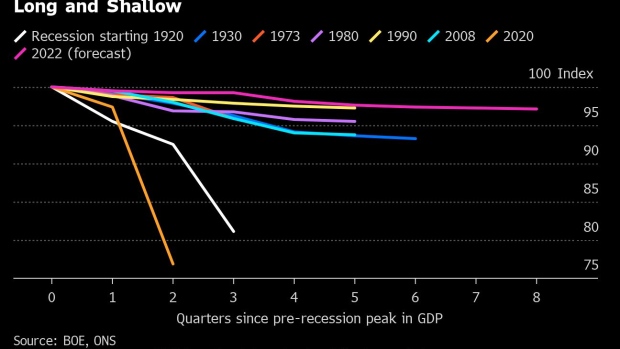 City workers stand in view of the Bank of England (BOE) in the City of London, UK, on Monday, Oct. 17, 2022. The Bank of England said it was restarting its corporate bond-selling as it looks to return to normality in the wake of a sustained selloff in UK assets. , Bloomberg

John Vickers, a former chief economist who joined the central bank in 1998, will say in his Beesley lecture in London on Wednesday night that the central bank has fallen short and must be bolder to bring inflation back to the 2% target.

Consumer prices surged by 10.1% in the year through September, the most in four decades.

“As things stand currently, they need to tighten policy appreciably when the real economy is weakening,” Vickers will say. “This may well need more boldness than has been evident so far.”

The BOE’s Monetary Policy Committee raised rates by three quarters of a percentage point, the biggest single increase in 33 years, to 3%. Vickers, who started calling for tighter policy in June 2021, said rates should have already been at 4% before the meeting.

The BOE only started raising rates in December and has moved more slowly than other major central banks, like the US Federal Reserve, since.

His comments follow a series of fierce attacks from four of the BOE’s original rate setters in 1997, who spoke on Friday at an event co-hosted by Fathom Consulting and Chatham House. They described the BOE’s forecasts, published on Thursday alongside the rate decision, as “crazy,” “unbelievable” and “implausible.”

Charles Goodhart, a professor at the London School of Economics, and Sushil Wadhwani, who runs his own macro hedge fund PGIM Wadhwani, specifically targeted crtiticism at Ben Broadbent, the deputy governor for monetary policy.

Goodhart drew attention to a recent speech by Broadbent and related it to the BOE forecasts, which suggested rates would not need to rise much above 3% to bring inflation under control.

“To say that you can hold inflation down when holding interest rates at 3%. It’s crazy,” Goodhart said. “What model is that based on? Ben Broadbent had an odd model which I didn’t understand a few weeks ago. I’m not sure I believe it. In fact, I’m sure I don’t.”

Vickers will say he is similarly unconvinced by the BOE’s forecast that bringing inflation down will be simple, as the squeeze on incomes due to cost of living pressures does some of the work for the bank.

Wadhwani took issue with Broadbent’s comment that it is the markets’ “job to follow us, not ours to follow them.” Wadhwani said: “To have a deputy governor who thinks like that I found profoundly worrying.”

All five economists said rates would need to rise significantly above present levels because inflation was now clearly embedded in domestic price setting.

Willem Buiter, former chief economist at Citibank, said rates may need to go as high as 6% and the BOE’s suggestion that 3% may almost be enough was “dreaming.”

DeAnne Julius, a senior adviser at international think tank Chatham House, agreed that rates will need to reach 5% or 6%.

Wadhwani said that “second round effects seem completely obvious” even within the BOE’s own business surveys, which show that companies intend to raise prices and will tolerate higher wage demands.

“These are not firms whose inflation expectations are by any definition anchored, even three years’ out,” he said.

He said the BOE should be following Fed Chair Jerome Powell’s example and “keep it really simple -- to bring inflation down, do what it takes and monetary policy will respond to the data.”

Goodhart said the BOE would fail to contain inflation because it means inducing a big rise in unemployment. As that will threaten to make the BOE “highly unpopular, I don’t think the bank either will or will want to raise interest rates anything like enough -- they won’t do it, and it won’t be done.”

Vickers will warn that failing to grapple with inflation will mean the UK risks losing “the huge asset of monetary policy credibility.”