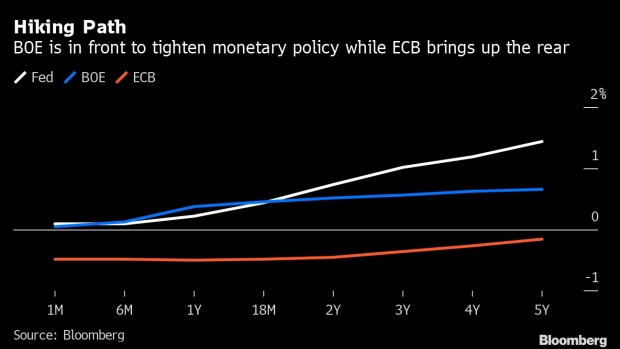 (Bloomberg) -- The pound is about to enter a new era of strength against the euro, thanks to the Bank of England’s hawkish turn.

Traders have raised the odds of a rate hike in February to 60% after the BOE made clear last week that it’s beginning a countdown to end the era of rock-bottom borrowing costs. And it’s given sterling the momentum it needed to break past 85 pence per euro -- a barrier that had been intact since early April -- to hit the strongest level since February 2020.

The shift comes as pound outperformance against the euro ground to a halt after a 4.2% gain in the first half of the year, the best since 2015. In the past month, a spike in the country’s Covid-19 infection rate forced once-bullish investors to reconsider their outlooks. Now, the currency’s future is brightening as a recovery in manufacturing and services gauges prompted the BOE to lift its growth forecasts.

“Every time U.K. economic data surprises on the upside the rockets under sterling fire up all the more,” said Savvas Savouri, chief economist at Toscafund Asset Management. “The BOE should hike interest rates sooner than most of its Group-of-10 peers and the GBP should benefit from this move, especially against the euro.”

Ahead of the Curve

A rate hike in the first half of 2022 would put the BOE ahead of the Federal Reserve in exiting the era of extraordinary measures during the coronavirus crisis. It also marks a stark contrast with the European Central Bank, which signaled last month it’s in no rush to start talking about whether to phase out asset purchases.

The pound ended the week up 0.7% to 84.75 pence per euro, its biggest advance in almost three months.

Once the epicenter of wild gyrations and record trading volumes amid fractious Brexit negotiations, the euro-pound pair has slumbered more recently.

Analysts see the cross staying at 0.85 through the second quarter of 2022, according to forecasters surveyed by Bloomberg. They have steadily revised down estimates for their year-end euro forecast, from 90 pence all the way down to 0.85.

Historic volatility for the last six months fell to the lowest since 2014, frustrating traders who had gotten used to its wild swings and potential to generate outsize profits for those who could time it right.

While implied volatility in the next 12 months is the lowest in over a decade, it presents an opportunity for traders willing to bet the current range will be broken, according to Neil Jones, head of foreign-exchange sales to financial institutions at Mizuho.

Beyond the divergence between BOE and ECB policy, Jones pointed to the U.K.’s domestic recovery as another driver of sterling strength.

If the U.K. currency sustains last week’s gain beyond 85 pence per euro through the end of the month, it would trigger more demand and could spur further gains toward 82.50 pence by the fourth quarter, he said.

“Sovereign divergence, Covid recovery and increased signs of an open for business mandate should continue to push the pound higher,” Jones said.

The BOE is more confident about the U.K.’s economic recovery, governor Andrew Bailey said Thursday, and officials bumped up their growth forecasts for 2022 and 2023. The country’s speedier vaccination program has allowed output to recover more quickly, and from lower levels, than in Europe, according to George Buckley, chief U.K. and euro-area economist at Nomura International.

Hugh Gimber, global market strategist at JP Morgan Asset Management, expects the pound will outperform the euro. Yet he’s wary that any resurgence in Covid-19 cases or labor-market uncertainty linked to the end of the furlough scheme this month would give the central bank pause when it comes to withdrawing support.

“Ultimately, given a choice of tightening policy too early or too late, the bank currently appears far more comfortable with the latter option,” Gimber said.

Traders don’t expect the BOE benchmark rate -- currently 0.1% -- to reach the initial withdrawal trigger point of 0.5% until the first half of 2023. Strategists are debating whether markets are too complacent over policy tightening beyond that time frame.

For Lee Hardman, currency analyst at MUFG, the BOE’s shift only strengthened his conviction in shorting the euro against sterling.

“We have become more confident in our bullish outlook for the pound on the back of encouraging Covid developments -- yesterday’s BOE policy update has not changed our view,” Hardman said.