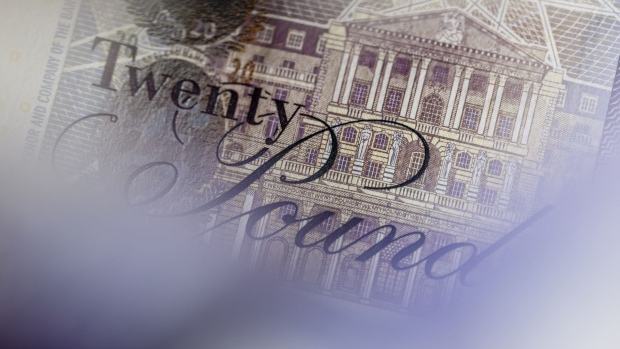 (Bloomberg) -- With the UK having gone from an economy with a massive inflation problem to one facing a huge crisis of confidence, policy makers face a narrow set of options to dig themselves out of the morass they are in.

The Bank of England and Treasury will be hoping that the so-far outsized selling in gilts and the pound abates on its own. The pound has rebounded to around $1.0755 after plunging to $1.0350 earlier in Asian trading, but there seems to be little respite in the bond market. Two-year gilt yields have surged some 50 basis points to 4.45%, which means that the differential against the BOE’s policy rate -- which is now at 2.25% -- is more than 200 basis points. That may be thought of as a dipstick of how far behind the curve the policy rate is.

If yields surge unchecked, it will mean the BOE will be forced to step in, willy-nilly. The most straightforward way of addressing this problem would be to raise interest rates by a big margin -- 300 basis points would be a minimum -- at one go. For instance, the UK was forced to put up interest rates to punitive double-digit rates when it decided to pull out of the European Exchange Rate Mechanism three decades ago. In fact, interest rates during that period saw such stomach-churning volatility that it may have put a roller-coaster operator to shame.

The trouble with this option is that the BOE has been tardy in its response to inflation in this cycle, vexed as it has been even to get its benchmark rate to neutral, let alone restrictive, territory in response to rampaging inflation. It can scarcely be argued that a central bank that is uncomfortable implementing even conventional policy would be a willing customer in embracing an unconventional prescription.

The BOE may mount a defense of the pound, but by global standards the UK’s chest of foreign reserves isn’t massive. Japan recently intervened in the currency markets, but the nation has among the highest reserves globally, so it has enough fire power to draw upon in its fight against currency speculators.

However, the BOE may join hands with the European Central Bank and other central banks to attempt a joint intervention. If push comes to a shove, this may, in fact, be the BOE’s preferred option since a joint attempt would pretend to tell the world that the weakness in the pound is all due to the Federal Reserve raising interest rates, skirting the issue of the UK’s fiscal stimulus adding fuel to the inflation fire -- and thus offer a face-saving tactic. The ECB has also been sufficiently worried about the euro in recent weeks, and the currency’s descent alongside the pound may just engender joint action.

Presumably the methodology of all this would be worked out in the back-office channels of the central banks, but if it comes, it’s likely to be announced at a time when both the Asian and Europe markets are active and will be designed to deliver the biggest punch for their collective currencies.

There is little question that the BOE will desperately wish for Option One, but if the ructions don’t settle, Option Three may be the most practical.