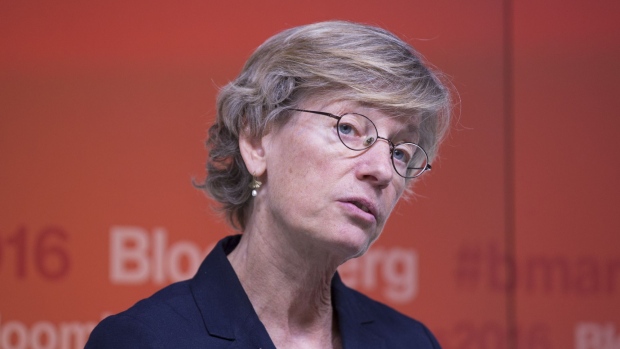 Catherine Mann, chief economist at the Organization for Economic Cooperation and Development (OECD), speaks at the Bloomberg Markets Most Influential Summit in London, U.K., on Wednesday, Sept. 28, 2016. The conference brings together the world's most influential leaders in finance, business and government to discuss the global economy. Photographer: Jason Alden/Bloomberg , Bloomberg

“There’s a lot of endogenous tightening of financial conditions already in train in the U.K.,” Mann said in a webinar on Thursday. “That means that I can wait on active tightening to a Bank rate rise.”

The former Citigroup Inc. global chief economist, however, signaled that the impact of Brexit as well as supply disruptions could mean firms can pass on prices increases to customers.

Her remarks suggest that while she may not vote to raise rates as early as this year, she generally accepts that policy tightening is in the cards.

The pound and U.K. government bonds were little changed after her comments.

Money markets have priced in the first rate hike from the BOE by the end of this year, speculation that Governor Andrew Bailey and his colleagues have allowed to run for weeks.

“Financial markets are doing their homework. They see that monetary policy normalization is the direction of travel,” Mann, who became an external member of the Monetary Policy Committee in September, said.

“The concern that I have is that the global factor and the border factors, with respect to U.K. prices, are going to boost domestic firms’ pricing power relatively more in the U.K. than in ... the U.S. and the euro area,” she said.