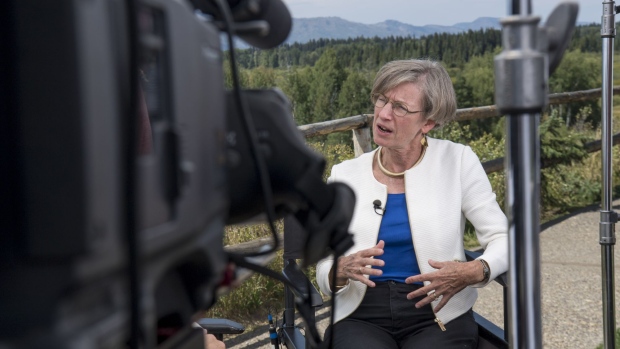 (Bloomberg) -- Bank of England policy maker Catherine Mann said she’s considering whether interest rates need to rise by more than a quarter point next month, reigniting the debate about a quicker pace of tightening for monetary policy.

“We can look at whether or not an additional 25 basis points or more might be necessary in order to keep inflation anchored,” Mann said in response to questions after a speech on Thursday.

The policy maker joined three other colleagues on the nine-member Monetary Policy Committee in voting for a half-point rate rise in February. The BOE ultimately lifted rates a quarter point then and also in March, when there were no votes for a out-sized move.

Money markets cranked up BOE tightening wagers after the remarks, betting on at least one half-point hike by August. Yields on U.K. two-year government bonds -- which are the most sensitive to monetary policy -- surged as much as 11 basis points to 1.68%.

Mann said that some hallmarks of “stagflation” are starting to set into the U.K. economy. She was careful to say it’s not headed to the sort of turmoil it suffered in the 1970s, when surging inflation set off a spiral of rising prices that weighed heavily on the economy.

“If we’re talking about rising energy prices and slowing retail sales, then in some sense we could say we’re already there (stagflation) but … it’s premature to harken back to the 1980s and 1970s. It’s premature to use that vocabulary.”

Mann said she’s focused on how well the U.K. economy holds up in the face of a consumer spending squeeze as she weighs whether to vote for higher interest rates next month.

“There’s been quite a bit more volatility in financial conditions in recent times since the March meeting,” Mann said. “This also has to be considered as part of the landscape when thinking about the appropriate combination with bank rate.”

With consumer price inflation already at a new 30-year high of 7% in March and the war in Ukraine also depressing demand, the MPC will consider how much it can tighten policy without adding to the risk of a recession.

Mann, Citigroup Inc.’s former global chief economist, told a web event on Thursday that key topics for her would be inflation attitudes, how much and when the drag on consumption would materialize and whether price forecast revisions were already showing up in a key BOE survey.

She suggested that if the economy holds up during the cost-of-living crisis, the BOE may have to tighten monetary policy faster.

“Should the impact on aggregate demand of the energy price shock end-up being more modest than currently foreseen, should wage and price expectations and outcomes remain as strong as they currently are, and should financial markets return to being copacetic on private credit and duration risk, a reassessment of the pace of tightening would be warranted,” she said.

The bank’s prime role, she said, is to keep inflation expectations anchored.

“By doing so now, less tightening will be required later, when demand may still be weak.” Still, she added that her votes for early hikes did not imply bigger moves later were likely.

(Updates with remarks from the speech.)