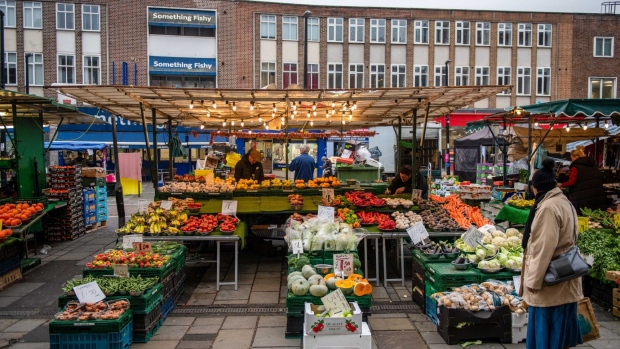 Shoppers browse and buy fruit and vegetables for sale at an independent greengrocer's market stall in London, UK, on Tuesday, Nov. 29, 2022. UK retailers are cutting jobs and scaling back investment in response to mounting economic gloom, according to the Confederation of British Industry. , Bloomberg

(Bloomberg) -- Bank of England policy maker Catherine Mann said inflation exceptions are becoming “increasingly embedded” in the prices that companies are setting and are drifting toward double the 2% target level.

“Services pre-Covid were running at well below 2% inflation,” Mann said in a web event on Tuesday. “Now services are running above 3%. This is a dramatic change in the underlying pace of inflation.”

The remarks highlight Mann’s support for sharp increases in the benchmark lending rate, which the central bank has lifted to 3% from near zero a year ago. Investors expect another half-point increase in December.

“I have been on the side of voting somewhat more aggressively, in terms of guiding the economy with a more front loaded change in bank rate,” Mann said.

Mann said it’s crucial to get inflation expectations under control before considering when to ease monetary policy, a remark suggesting that any pivot away from tightening remains months away. Instead, she indicated that rates have further to rise.

Mann brushed aside a question about whether she’d support a “super-sized” rate hike in December,  saying she wants to see the economic data before deciding.

(Updates with comments from Mann from the fifth paragraph.)