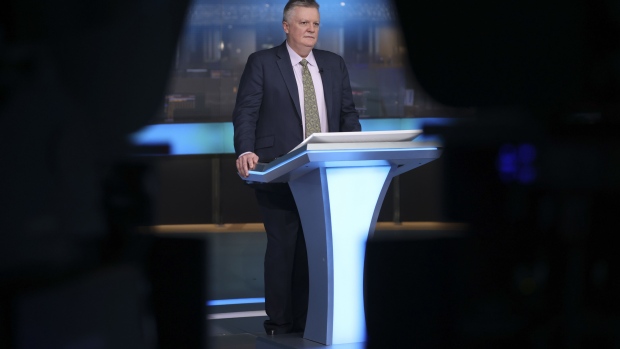 Huw Pill, chief economist at the Bank of England, during a Bloomberg Television interview in London, U.K., on Friday, Feb. 4, 2022. Pill said the benchmark lending rate in the U.K. will probably rise again in the coming months and a squeeze on living standards is probably unavoidable. Photographer: Hollie Adams/Bloomberg , Bloomberg

(Bloomberg) -- Bank of England Chief Economist Huw Pill dismissed calls for the central bank to cut the interest it pays on reserves held by commercial lenders.

He said the BOE could pay nothing on some of the roughly £850 billion ($1.03 trillion) of deposits, potentially saving the taxpayer tens of billions of pounds. But insisted he was “not a fan of the proposal” and that a cleaner approach would simply be to tax the banks.

“If governments want to tax banks or they want to subsidise them, they should do that transparently, they shouldn’t do it through the central bank balance sheet and hope that nobody notices,” Pill said at a conference in London.

As part of the BOE’s quantitative-easing program, an equivalent amount of reserves were created. The central bank pays interest on those at the benchmark rate, a cost that was initially more than covered by income earned on government bonds bought by the BOE with the money it created.

But with the BOE aggressively raising interest rates to fight inflation, the arrangement is now costing the Treasury billions of pounds. Rates have risen from 0.1% to 3% in a year and are expected to reach 4.5%.

The gains for high street banks have been likened to a windfall. Former BOE Deputy Governor Paul Tucker is among those saying a form of “tiering” of those reserves should be examined.

Pill said it was plausible that interest be paid on a small share of the reserves but the BOE “cannot accept anything that interferes” with the operation of monetary policy.

Reserves have been remunerated at Bank Rate since 2009 as way of making sure the central bank policy is passed through to the economy via the banks.

Pill’s opposition was reinforced by former BOE policymaker Gertjan Vlieghe, who agreed that changing the payments “can be done, but there is risk of miscalibration” that disrupts the working of monetary policy in the short term.

“If you want to tax the banks, fine,” Vlieghe told the Bank of England Watchers’ conference. “Just put a tax on them. Don’t say I owe you a lot of money, and as we know, when you owe money you pay interest on it, but I’m just not going to pay it. That’s a default in my book.”