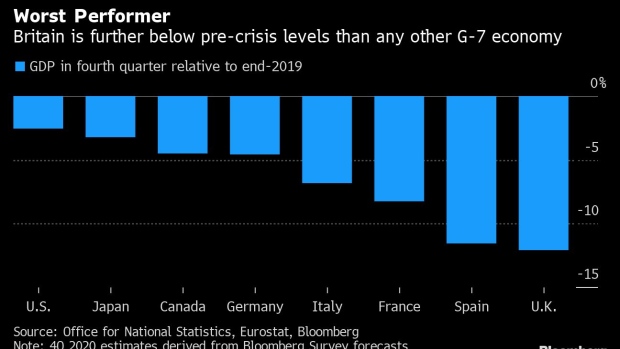 The Bank of England (BOE) in London, U.K., on Thursday, Dec. 17, 2020. Bank of England policy makers make their final scheduled decision of the year on Thursday as uncertain as ever whether the U.K. will get a post-Brexit trade deal. Photographer: Hollie Adams/Bloomberg , Bloomberg

(Bloomberg) -- The Bank of England should be prepared to add monetary stimulus including negative interest rates to complete the economic recovery from the pandemic, according to policy maker Gertjan Vlieghe.

While vaccines may mean current measures are enough to get through the health crisis, the hit to jobs and investment -- combined with the need to deal with Brexit “whether there is a deal or not” -- could mean the recovery peters out sooner than desired, the Monetary Policy Committee member said in a Bloomberg interview on Friday.

“If we go back close to where we were before Covid hit, but not quite all the way, then that’s not good enough,” he said.

If markets are calm but demand is weak enough to need another boost from the BOE, then “a combination of QE and probably lower rates is what’s going to be required,” he said.

The pound slipped after the remarks were published to trade at $1.3528 as of 12:57 p.m. in London. U.K. bonds extended gains to leave the 10-year yield four basis points lower at 0.25%. Money markets meanwhile brought forward bets on further BOE easing and expect a rate cut to 0% in March 2022.

Vlieghe spoke a day after the Monetary Policy Committee voted unanimously to keep its current bond-buying program on hold at its benchmark interest rate at 0.1%. He said that if more stimulus is needed, he has relatively low expectations how much more bond-buying can achieve, and any rate cut would need to be sizable.

That would mean the BOE taking its benchmark below zero for the first time. Policy makers are already studying whether such a move can be implemented without disrupting the banking system.

“Once we talk about adding significant stimulus to the economy, then the rate cut we can do without going negative is obviously very small,” Vlieghe said. “The risk it ends up being counterproductive is low, and therefore if we find ourselves in circumstances where we need more stimulus, that would be a risk I’m willing to take.”

Recent developments in the roll out of vaccines are likely to support the economy and significantly reduce the risk of needing to add further stimulus to tackle the immediate Covid crisis, he said.

But he also warned of a hard few months ahead.

“We have to acknowledge that we have a very tough winter to get through,” he said.

“Cases are rising again, the vaccine is not going to come soon enough to contain that,” Vlieghe said. “So we’re going to need further restrictions which we’re already seeing, and also the economy is going to have to adjust to Brexit, whether there is a deal or not.”

And if market volatility flares up, the BOE can scale up asset purchases, he said.

“That’s something that we can, and will, deploy very quickly if that’s required,” he said. “We can call a meeting with just a moment’s notice.”