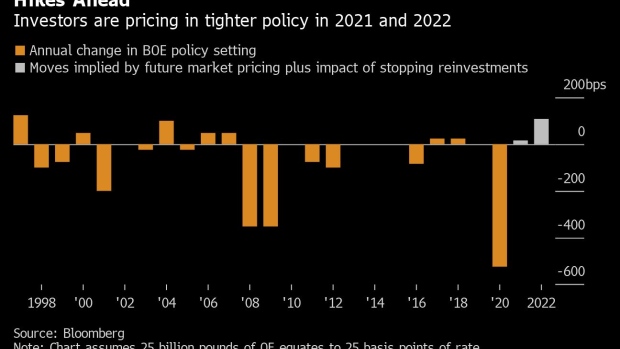 (Bloomberg) -- The Bank of England will likely defy investors’ expectations of a sudden interest-rate increase next month because it rarely shifts policy in such dramatic fashion, according to three former senior officials.

Spurred on by comments from Governor Andrew Bailey and others, markets anticipate the BOE will start an aggressive cycle of hikes on Nov. 4, with the key rate rising to almost 1.25% by the end of 2022 from 0.1% now.

Andrew Sentance, David Miles and John Gieve, who served on the Monetary Policy Committee at different times during and after the global financial crisis, said it’s unlikely the BOE will deliver on such a shift. They note that not one of the nine members of the panel has voted for higher borrowing costs since the pandemic.

The risk is that inaction may shatter the U.K. central bank’s credibility among investors after weeks of signals that a move is imminent. To avoid that, Bailey and his colleagues may vote to end the BOE’s bond-buying program almost two months ahead of schedule and signal that a rate increase will come soon after, both Miles and Gieve said.

“We haven’t seen any votes for a rise in interest rates yet, so it would be quite a big shift for that to happen,” said Sentance, who served on the MPC from 2006 to 2011 and has been calling for higher rates for months. “They’ve boxed themselves in with Andrew Bailey’s comments that seem to have come out almost by accident.”

Bets for a move in November intensified after Bailey said on Oct. 17 that the central bank “will have to act” to tame inflation. Policy makers expect consumer prices to leap above 4% this year, more than double their target.

That marks a sharp contrast with the MPC’s voting record since the BOE gained authority to set rates in 1997.

Officials since then have rarely moved from one extreme position to another without laying the ground with dissenting votes. Of the 21 rate increases during that period, only six followed meetings when officials had voted unanimously to hold, and half of those times were in the 1990s.

What Our Economists Say ...

“The bank is making a strategic misstep. Governor Andrew Bailey is too worried about the central bank’s credibility and not nearly worried enough about choking off the recovery early.”

The speed of the market’s repricing -- which HSBC Holdings Plc says is one of the fastest in history -- has come after a flurry of reports called into question the bank’s assertion that the surge in inflation will prove transitory.

Against that backdrop, officials may be worried that inaction could undercut their inflation-fighting credentials.

“If credibility does wane materially, you can get into inflation spirals,” said Erik Britton, director at Fathom Consulting, who analyzed data from the U.S. and U.K. since 1970 to build a measure of central bank credibility. “It is drifting now. That is something central banks should be worried about.”

Bailey and his colleagues have yet to seriously push back against the market’s expectations, and traders may feel they’ve been duped “if the bank does not move at all,” said Gieve, who is a former deputy governor of the BOE.

On the other hand, he said, policy makers “won’t want to look like they are being pushed around.”

The BOE’s credibility was called into question under former Governor Mark Carney, who was branded an “unreliable boyfriend” and accused by lawmakers of misleading markets about future rate moves.

A November hike would also mean moving without data to show whether the end of the furlough program caused a spike in unemployment, something the MPC previously said would be an important consideration.

Still, there is evidence the balance on the committee has shifted from leaning toward supporting economic growth to worrying about accelerating prices.

In September, the central bank dropped guidance that rates won’t rise until it sees signs of a sustained rise in inflation. Buried deep in the minutes of that meeting, the MPC also signaled it was prepared to raise rates before the end of the year if necessary.

Deputy governor Dave Ramsden and external member Michael Saunders, who both voted to end the QE program in September, are seen as almost certain to back a rate hike. Bailey’s rhetoric in recent weeks has boosted speculation that he will join them.

On the other hand, Silvana Tenreyro and Catherine Mann have both indicated they are prepare to wait longer before moving.

That leaves the balance of power with three members who haven’t made their views know: Deputy Governors Ben Broadbent and Jon Cunliffe as well we external member Jonathan Haskel. The latter two are largely considered to lean toward more patience, raising the potential for a tight vote.

A decision to move next month would be all the more dramatic considering that, just last month, seven MPC members voted to continue their quantitative easing bond plan until the end of the year.

“Bear in mind that Sept. 23 isn’t that long ago, and back then you had seven members voting to continue QE,” said Simon Wells, chief European economist at HSBC and a former BOE economist. “That would be a very quick turnaround.”

David Miles, who was on the MPC from 2009 to 2015, said the central bank has missed an opportunity to end QE early, which he said was a “relatively low-cost signal that they were prepared to take action.”

“It’s not too late to say we are not going to do that last tranche of purchases,” he said. “It is a halfway house -- not making policy yet more expansionary and showing you are willing to act, while buying some time.”

Like Miles, Gieve said he expected the committee to end the purchases early and signal that higher rates were likely in the coming months.

Sentance said it would be unusual for the BOE to raise rates in December, a move that only happened once since 1975, suggesting the first rate rise may come early in 2022.

(Updates with the pound’s reaction in sixth paragraph.)