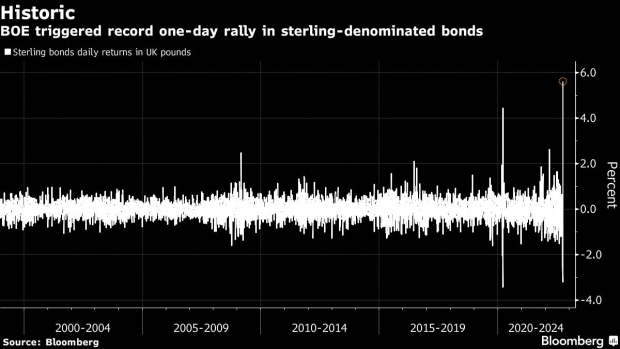 Commuters outside the Bank of England in London, UK, on Wednesday, Sept. 21, 2022. The Bank of England on Thursday is set to raise interest rates and start selling assets built up during a decade-long stimulus program, a historic tightening of monetary policy designed to clamp down on inflation. , Bloomberg

(Bloomberg) -- The global debt rally extended to Asia after the Bank of England’s surprise bond market intervention sparked a rush of short covering and some of the most extreme volatility in months.

Yield premiums on Asia investment-grade dollar bonds tightened three to five basis points, according to credit traders. They widened 10 basis points Wednesday, the biggest blowout since March 2020, according to a Bloomberg index. That makes for the most volatile two sessions since late June.

The UK bond market clawed back some of this year’s losses Wednesday, rallying by a record 5.6%, according to a Bloomberg index with data stretching back to 1998. That helped government and corporate notes globally eke out gains of 0.8%, the most in seven weeks.

While the BOE’s dramatic intervention to buy an unlimited amount of long-dated bonds triggered record gains for gilts, concerns about historically high inflation and further monetary tightening by central banks including the Federal Reserve will likely temper any prolonged rally.

“The BOE’s emergency bond buying plan is certainly helping markets calm down,” said Pauline Chrystal, a portfolio manager at Kapstream Capital in Sydney. “But the same issues that lead us to be really cautious haven’t been resolved yet, including inflation in the US.”

Sterling-denominated debt has still lost 26% year-to-date, despite the rally on Wednesday.

The announcement by UK Chancellor of the Exchequer Kwasi Kwarteng last Friday of dramatic tax cuts triggered a run on British assets on concerns about the ability of government to fund the move and its potential to further accelerate inflation.

“The direction of the pound and BOE is a short-term side-show,” said Todd Schubert, head of fixed-income research at Bank of Singapore. “Volatility will likely continue until there is more certainty that inflation has peaked.”

The drop in dollar borrowing costs spurred at least three issuers from the region including a unit of Japan’s Komatsu Ltd. to market debt in the US currency on Thursday.

The UK tapped its July 2053 green gilt amid chaotic market scenes on Wednesday, with investors piling in amid market turbulence.