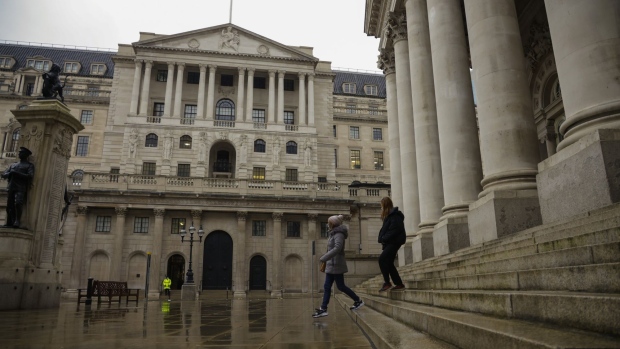 The Bank of England in the square mile financial district of the City of London, U.K., on Monday, Jan. 4, 2021. Britain's long-awaited trade deal with the European Union still leaves many questions unanswered for the world's biggest banks, trading venues and money managers as they prepare for a rupture in the region's financial system. Photographer: Jason Alden/Bloomberg , Bloomberg

(Bloomberg) -- The Bank of England will improve the way it communicates about how it stimulates the economy through quantitative easing, a response to an internal report that found the method is poorly understood.

A report from the BOE’s Independent Evaluation Office published Wednesday found the central bank’s 900 billion-pound ($1.2 trillion) program has been delivered “effectively” but there were “important knowledge gaps” in its technical understanding of the tool. It also noted public grasp of the the policy was low, and there were particular concerns over its potential side effects.

“QE remains a poorly understood monetary policy tool for much of the public and for some its use has been contentious,” the report said. “To continue to build trust and understanding, we suggest that the bank develops more accessible, layered communications on QE.”

The U.K. central bank welcomed the report and said it would follow its recommendations, including by making its descriptions of QE “more intuitive and relatable.” It also plans to publish “a set of responses to frequently asked questions on QE to support the Bank’s public understanding work.”

The report comes after the BOE more than doubled its asset purchase target in 2020 as part of its efforts to contain the economic impact of the coronavirus. While the report focused on QE, it also said “the bank may wish to consider whether our findings could be applied to other elements of the policy toolkit.”

That advice may be need to heeded soon, should the BOE decide to push interest rates below zero for the first time -- a tool that is currently under review.