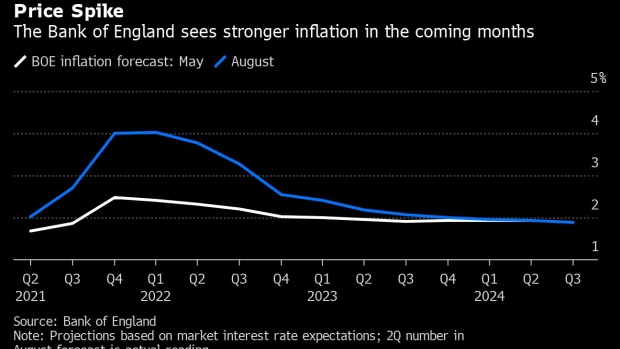 (Bloomberg) -- The Bank of England said U.K. inflation will spike higher than expected above 4%, as officials reckoned on the need for some “modest tightening” in due course to keep price growth under control.

Michael Saunders was concerned enough to vote for stimulus to wind down as soon as possible. That stance was overruled by the rest of the eight-member Monetary Policy Committee, who judged that higher inflation will be mostly transitory, though they flagged the need to take their foot off the stimulus pedal to meet their 2% inflation target “in the medium term.”

“The economy is projected to experience a more pronounced period of above-target inflation in the near term than expected in the May Report,” officials said in a statement. “Some modest tightening of monetary policy over the forecast period is likely to be necessary.”

Officials led by Andrew Bailey also gave more clues about their approach to removing stimulus when the time comes, saying that they will start to unwind their 875 billion-pound ($1.2 trillion) quantitative easing program when the interest rate reaches 0.5%, much lower than previously signaled.

U.K. 10-year bond yields were little changed at 0.51% after the decision, erasing an earlier one-basis-point increase.

A spike in inflation in the wake of the pandemic has increased the focus on the prospects for tighter policy from central banks around the world, although most insist the jump is temporary. While the BOE does too, its assessment of the peak has increased considerably from the previous level of above 3% predicted in May.

The BOE’s stance still chimes with a global hawkish shift. In New Zealand for example, officials drew an abrupt end to their own quantitative easing program in July, and might even raise rates this month. Meanwhile on Wednesday, U.S. Federal Reserve Vice Chairman Richard Clarida said the central bank is on course to start paring bond purchases later this year before lifting interest rates in 2023.