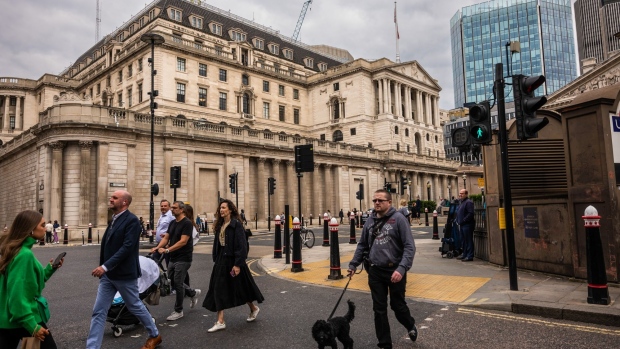 Pedestrians cross the road junction outside the Bank of England in London, UK, on Wednesday, Sept. 21, 2022. The Bank of England on Thursday is set to raise interest rates and start selling assets built up during a decade-long stimulus program, a historic tightening of monetary policy designed to clamp down on inflation. Photographer: Jose Sarmento Matos/Bloomberg , Bloomberg

(Bloomberg) -- Government bonds bought by the Bank of England to stabilize markets over coming days will be sold off as soon as “risks to market functioning are judged to have subsided,” Deputy Governor Dave Ramsden said.

In comments at a conference held by the Bank of Lithuania and Bank for International Settlements, Ramsden stressed that the purchases would be “strictly time limited” and “temporary,” an indication the BOE hopes to unwind the position relatively quickly.

On Wednesday, the BOE took emergency action to prevent a problem in markets turning into an economic crash.

Ramsden said the BOE stepped in over fears that “dysfunction” in the long-dated gilts market, of maturities over 20 years, posed “a material risk to UK financial stability” that could have resulted in “a reduction of the flow of credit to the real economy.”

The BOE is keen to distinguish the emergency market intervention from quantitative-easing bond buying, which is a monetary policy tool. The £875 billion gilt portfolio built up under QE since 2009 has only just started to be unwound.

To reinforce the distinction, gilts bought between Sept. 28 and Oct. 14 to stabilise markets will be held in a separate portfolio. The first of the emergency purchases took place yesterday, when the BOE offered to buy £5 billion. Only £1 billion was needed.

The bail-out could total as much as £61 billion over the next fortnight, but the BOE will be hoping its pledge to buy “on whatever scale is necessary” will restore enough confidence to improve market functioning and keep the final total of purchases fairly small.

That would allow it to unwind the purchases relatively quickly. A portfolio of corporate bonds the BOE bought in 2009 during the financial crisis to stabilize those markets was offloaded within three years.

Ramsden added that the BOE and other central banks and supervisors were “on alert for further signs of strain and the attendant risks of dysfunction.”

“The purchases will be unwound in a smooth and orderly fashion once risks to market functioning are judged to have subsided.”