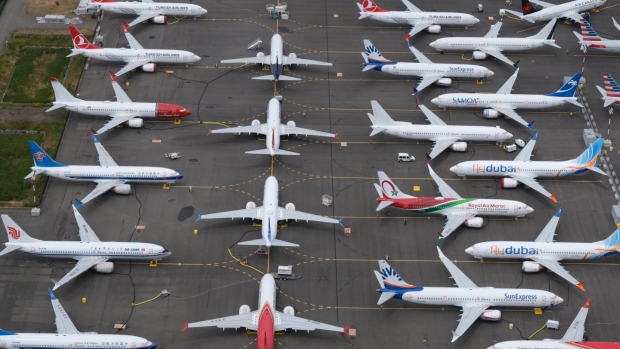 SEATTLE, WA - JUNE 27: Boeing 737 MAX airplanes are stored in an area adjacent to Boeing Field, on June 27, 2019 in Seattle, Washington. After a pair of crashes, the 737 MAX has been grounded by the FAA and other aviation agencies since March, 13, 2019. The FAA has reportedly found a new potential flaw in the Boeing 737 Max software update that was designed to improve safety. (Photo by Stephen Brashear/Getty Images) , Photographer: Stephen Brashear/Getty Images North America

(Bloomberg) -- The Federal Aviation Administration is likely to conduct its certification flight for Boeing Co.’s 737 Max in October, a key milestone toward returning the grounded jetliner to the skies, said people briefed on the matter.

That timing would be broadly consistent with Boeing’s estimate that the Max will return to service early in the fourth quarter, but may push the submission of a final certification package slightly beyond September, as the company previously estimated.

The U.S. planemaker is testing changes to the flight-control software architecture of its best-selling jetliner, which suffered two fatal crashes in a five-month span. Boeing engineers have almost worked their way through hundreds of queries fielded by the FAA from colleagues around the world, with few new concerns being raised at this point in the process, the people said.

The Chicago-based company is also briefing customers on its plans for unwinding an unprecedented global grounding that has already surpassed five months, with about 600 planes temporarily mothballed.

“We continue to support the FAA and global regulators on the safe return of the Max to service,” Boeing said in a statement.

The FAA is focused on ensuring that the revamped 737 Max systems meet safety requirements, and doesn’t have a timeline for returning the plane to service, according to a statement by the agency. FAA employees have already spent 110,000 hours working on the project, it said.

“The FAA’s certification of the Boeing 737 Max is the subject of several independent reviews and investigations that will examine all aspects of the five-year effort,” the agency said. “While the agency’s certification processes are well established and have consistently produced safe aircraft designs, we welcome the scrutiny from these experts and look forward to their findings.”

There are still numerous tasks to be accomplished before Boeing can complete its submission to recertify the plane, said another person familiar with the process. The person wasn’t aware of a specific projection that the FAA test flight would occur in October, but said it was a possibility.

A certification flight with FAA test pilots is one of the final steps that must be conducted before Boeing’s submission is finalized, and based on the timing, the final paperwork may not be completed until the fourth quarter.

If the plane behaves as expected, the results become part of the package for certification. Even though FAA engineers have worked closely with Boeing for months, the agency must perform a series of checks after the submission is made before granting approval.

Another step in the process is a review by the FAA’s Flight Standardization Board, which must recommend training requirements for the plane. In April, it made a preliminary conclusion that pilots wouldn’t need simulator training before flights resume. But the body hasn’t issued its final conclusions.

To contact the reporters on this story: Julie Johnsson in Chicago at jjohnsson@bloomberg.net;Alan Levin in Washington at alevin24@bloomberg.net;Richard Weiss in Frankfurt at rweiss5@bloomberg.net