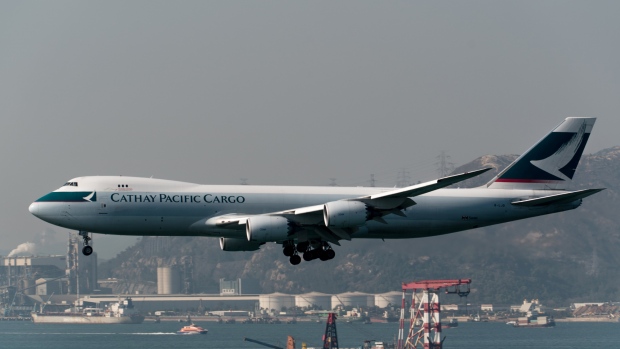 A Boeing Co. 747-867 cargo aircraft operated by Cathay Pacific Airways Ltd. prepares to land at Hong Kong International Airport in Hong Kong, China, on Saturday, March 11, 2018. Cathay Pacific is expected to report a full-year net loss of HK$2.7 billion ($345 million) for 2017, after a first-half deficit of HK$2.05 billion, according to the median estimate in a Bloomberg News survey of five analysts. , Bloomberg

The Southern California factory that has churned out fuselages for every Boeing Co. 747 jumbo jetliner is being sold for parts, potentially hastening the demise of the iconic aircraft.

Triumph Group Inc., the largest supplier to the 747-8 program, is starting to clear out a storied plant with an online auction of manufacturing gear that begins Wednesday afternoon. Located on Jack Northrop Avenue in Hawthorne, the factory was commissioned to build frames for the hump-backed aircraft after Pan American World Airways placed the initial order in 1966.

Barring a surprise sales bonanza of freighters, Triumph’s decision to wind down work on the 747 after years of losses will force Boeing to consider pulling the plug on its most recognizable jet. While it has enough orders to continue building jumbos for now, the cash-strapped aerospace giant will eventually face a tough call: whether to invest in making fuselages, aluminum skins and other parts itself -- or finally end 747 output after half a century.

On the block at the Triumph plant is everything from band saws for as little as $5 to an automated press used to punch rivets into curved fuselage sections. Bidding for that starts at US$100,000, according to RAAR Group USA Inc, which is handling the liquidation sale.

If the Hawthorne factory closing marks the beginning of the end for the aircraft dubbed the “Queen of the Skies,” Boeing isn’t saying. The Chicago-based planemaker earlier explored plans to take over manufacturing of the 172-foot-long fuselage sections, then scrapped the idea in 2016 amid tepid sales.

“We are continuing to build 747-8s to meet the backlog of orders for the airplane and will continue to make the right decisions to keep the production line healthy,” Boeing spokesman Paul Bergman said in an email. “With production slots filled for the next several years, we are working closely with our suppliers to deliver on our customer commitments.”

The jumbo opened international travel to the mass consumer market when it was introduced in 1970, but four-engine jets have fallen from favor as airlines switched to more efficient twin-engine models such as the Boeing 777 and Airbus SE’s A350. A freighter version has greater appeal since a hinged nose flips up to allow cargo haulers to front-load bulky loads like oil-drilling equipment.

Boeing has just 18 unfilled orders in its backlog -- most of them bound for United Parcel Service Inc. -- and failed to win any 747 sales this year as trade tensions sapped demand for air cargo. Still, the orders are the equivalent of three years of production, buying time for the U.S. manufacturer in case the market revives.

Triumph is working ahead to provide fuselages for those remaining aircraft, Bergman said. Along with the Hawthorne plant, which is slated to close in December, the supplier will also shutter a Dallas-area factory over the next year or so that makes tail sections, floor beams and other parts.

The 747 can’t be written off just yet, said Stephen Perry, an investment banker who specializes in aerospace and defense deals. Boeing’s mid-sized 767, once on life support, has enjoyed a miraculous recovery as a freighter thanks in part to a large military contract and sales to UPS and FedEx Corp.

“If there’s demand, they will find a new home for it,” Perry, managing director with Janes Capital Partners, said of the fuselage-panel manufacturing. “If there isn’t, the 747 will quietly disappear.”