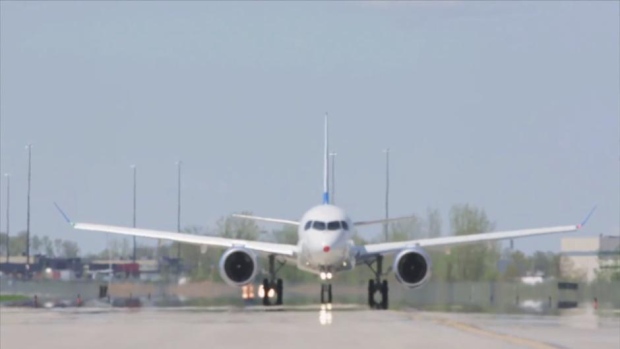 Boeing Co said on Tuesday that Bombardier Inc's CSeries jets could still be hit with high U.S. import duties, even if they are assembled in Alabama through an industry-changing deal with Airbus.

The deal announced on Monday gives Airbus a majority stake in Bombardier's troubled CSeries jetliner programme, securing the plane's future and giving the Canadian firm a possible way out of a damaging trade dispute with Boeing, in which the U.S. Commerce Department has threatened to impose a 300 per cent import duties.

Boeing said that the announced deal has no effect on the pending U.S. Department of Commerce proceedings.

"Any duties finally levied against the C-Series... will have to be paid on any imported C-Series airplane or part, or it will not be permitted into the country," Michael Luttig, Boeing's general counsel, said in a statement.

Investors cheered the winners of the deal that is set to shake up the $125 billion a year market for large jets. Bombardier shares jumped 15.7 per cent on Tuesday, while shares in Toulouse, France-based Airbus rose 4.8 per cent.

The transaction would give Airbus a 50.01 per cent stake in an entity recently carved out of Bombardier to produce and market the CSeries, four years after it first flew with a goal to enter the large jets market.

But in a move emblematic of the huge risks of aerospace competition, Bombardier will get just one dollar for the majority stake in exchange for Airbus's purchasing and marketing power to support an aircraft that has won fans for its fuel efficiency but had not secured a new order in 18 months for the 110-130 seat plane due to doubts over its future.

Bombardier and Airbus could argue they are importing parts, like the wing from Northern Ireland, to be assembled in the United States.

"That may be the loophole Bombardier is hoping to use," he said by phone.

In reality, the terms of the deal mean Bombardier could pay Airbus to take over by agreeing to underwrite $700 million of risks related to cost overruns in coming years.

"It's an unexpected move by Airbus but indicates they see good market potential for the CSeries. Neither they nor Boeing currently offer an aircraft in the regional jet market," said aerospace consultant John Strickland of JLS Consulting.

The deal is similar to one that Airbus walked away from in 2015 when it decided the investment in a plane that had not yet entered service was too risky. However this deal has one major difference - some of the jets will be produced in the United States. That could change the power balance in Bombardier's costly trade dispute with Boeing, though it is not the main reason why the two former rivals have come together, executives said.

"Assembly in the U.S. can resolve the [tariff] issue because it then becomes a domestic product," Bombardier's chief executive, Alain Bellemare, told reporters at Airbus's headquarters in Toulouse.

Airbus CEO Tom Enders hailed the tie-up as "a win for Canada ... a win for the UK," referring to Bombardier's wing-making factory in Northern Ireland, whose future had been threatened by the distant trade war. He said it would also create new U.S. jobs.

The deal appeared to catch Boeing off guard. Locked in a separate 13-year trade dispute with Airbus, Boeing on Monday called it a "questionable deal" between two of its subsidized competitors.

Bellemare said he hoped the deal would be approved within six to 12 months. Canadian Innovation Minister Navdeep Bains, who must officially decide whether to green-light the deal, said it looked like "Bombardier's new proposed partnership ... would help position the CSeries for success."

Bombardier said the partnership should more than double the value of the CSeries program. While it will lose control of a project developed at a cost of $6 billion, the deal gives the CSeries improved economies of scale and a better sales network.

For Airbus, the deal strengthens the bottom end of its narrowbody portfolio after poor sales of its own A319 model and expands its global footprint, potentially opening up further deals in other sectors in Canada.

Bellemare said the deal was expected to close in the second half of 2018.

"We're doing this deal here not because of this Boeing petition. We are doing this deal because it is the right strategic move for Bombardier," he said, referring to Boeing's complaint that the Canadian firm received illegal subsidies and dumped CSeries planes at "absurdly low" prices.

Bombardier said the deal would not result in job losses and would keep the head office in Montreal. Unions said the deal could benefit workers.

The Boeing-Bombardier dispute has snowballed into a bigger multilateral trade dispute, with British Prime Minister Theresa May asking U.S. President Donald Trump to intervene to save British jobs.

Bombardier is the largest manufacturing employer in Northern Ireland and May's Conservatives rely on the support of the small Northern Irish Democratic Unionist Party (DUP) party for their majority in parliament.

Business Secretary Greg Clark said Britain would work closely with the planemakers, while the DUP said the agreement was "incredibly significant news" for Belfast.

Talks for the deal between Airbus and Bombardier first started over dinner at the end of August.

Enders said the deal was different from an earlier round of talks in 2015, when he abruptly ordered an end to negotiations. He said the CSeries had since been certified, entered service and was performing well.

Some analysts said the deal could drive Boeing closer together with Brazil's Embraer, with which it already cooperates.

Bombardier is in the middle of a five-year turnaround plan after considering bankruptcy because of a cash-crunch as it developed multiple planes simultaneously, including the CSeries.