Boeing Co. shares dropped as the planemaker recorded US$5.5 billion in total charges and costs to cover higher factory and customer expenses for the 787 Dreamliner.

The rising toll for halted deliveries of the carbon-fiber 787 has wiped away any near-term profit for the marquee wide-body jet. The charges also overshadowed some rare good news for Boeing.

The aviation titan generated cash for the first time since early 2019: US$494 million in free cash flow for the fourth quarter, Boeing said as it reported earnings Wednesday. That’s earlier than the cash recovery that executives had forecast for this year. Wall Street had expected an outflow of about US$1 billion.

Boeing has also hiked output of its cash-cow 737, to 26 of the narrow-bodies a month from 19 in October, Chief Executive Officer Dave Calhoun said in a note to employees. The planemaker has burned through more than US$31 billion during a nearly three-year-long slump marked by the Max’s grounding, the COVID-19 pandemic and a spate of quality lapses.

“None of us like charges,” Calhoun said in an interview on CNBC. “It’s a big one and it reflects our reality with the delays, the rework process we’ve been involved with and the time it’ll take to work the way through the process.”

The 787 program’s profits have been wiped out as Boeing pays airlines for service they’ve lost because of delivery disruptions. The company hasn’t handed over any of the plane since June as it addresses structural imperfections on the roughly 100 aircraft in its system. 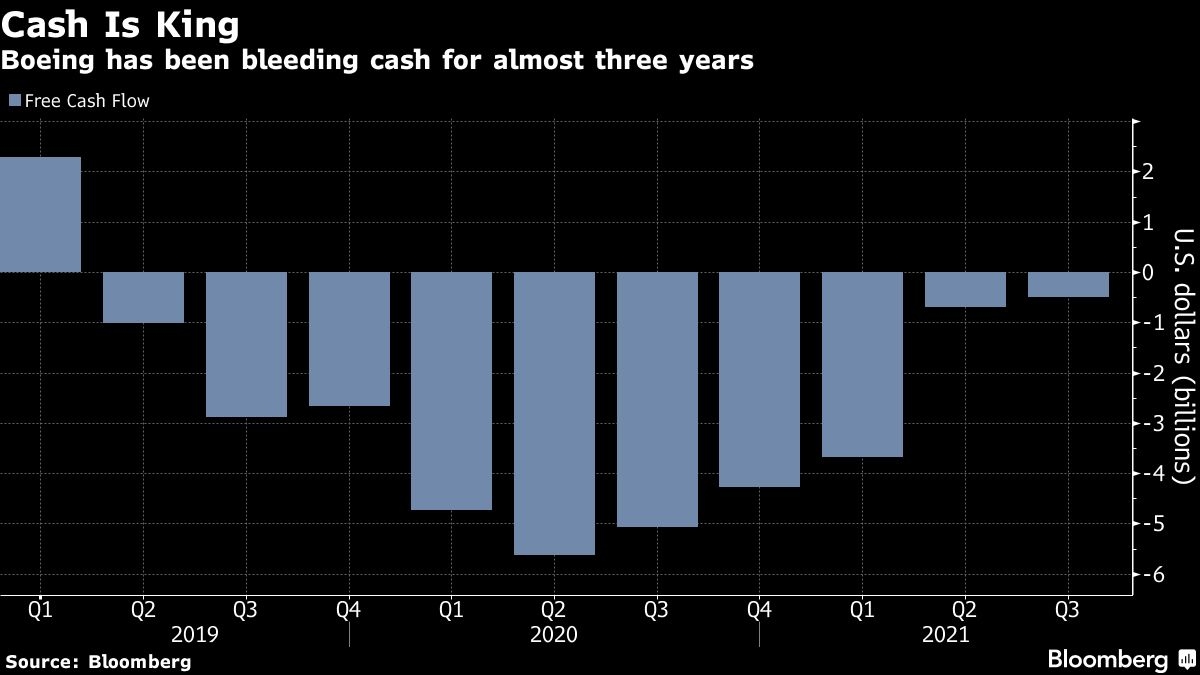 The Chicago-based company narrowed its fourth-quarter loss to US$7.69 a share, hit by the 787 costs. Revenue fell to US$14.79 billion, while analysts projected US$16.7 billion, according to the average of estimates compiled by Bloomberg.

Boeing shares fell 1.6 per cent to US$200.79 at 9:58 a.m. in New York, logging the biggest decline on the Dow Jones Industrial Average. The company’s shares gained 1.4 per cent this year through Tuesday, while the industrials dropped 5.6 per cent.

The company declined to provide financial guidance for 2022, a contrast with suppliers such as Raytheon Technologies Corp. and General Electric Co., which offered forecasts when they reported earnings. Investors will be looking for more details on the 787 program, progress in speeding up 737 Max production and the swelling inventory of undelivered jets.

Boeing has stashed around 350 of its 737 Max jets, 110 Dreamliners and 25 of the delayed 777X around its factories or in arid parking lots, Ken Herbert, an analyst at RBC Capital Markets, estimated before Boeing’s report. Clearing more of those jets from storage should help the company replenish its cash reserves and pay down debt.

The company recorded several 787-related charges and costs in the fourth-quarter after determining that resuming deliveries and clearing its inventory would take longer than expected. They included a US$3.5 billion pretax, noncash accounting charge to cover compensation to Dreamliner customers.

The company doubled so-called abnormal costs of estimated spending on Dreamliner inspection and repairs to US$2 billion and signaled that the work will extend through the end of next year.

Boeing said it is in detailed discussions with the U.S. Federal Aviation Administration over the actions necessary to resume deliveries but didn’t project when that might happen.

“Here we go again. Just as we saw with the 737 Max, Boeing is now racking up massive charges on the 787 with no firm end in sight, and its fate in the hands of the FAA,” analyst Rob Stallard of Vertical Research Partners wrote in a note to clients. The uncertainty over the jet “leaves Boeing looking a far riskier aerospace play than other higher quality names in the space.”