Boeing Co. delayed the debut of its newest plane and slowed production across the heart of its jetliner lineup as the company burned more cash amid the coronavirus pandemic

The planemaker intends to make deeper cuts to its commercial-aircraft and services business, with total job losses reaching 19,000 this year — 3,000 more than it said before. The new 777X won’t carry passengers until 2022 instead of next year. And Boeing again pared production plans for the 787 Dreamliner as a saturated market left the company with a stockpile of undelivered jets.

With the reduced manufacturing rates for the 787, Boeing is studying whether to consolidate assembly in a single site instead of building the model in Washington state and South Carolina. Boeing will also ramp up work at its 737 Max factory more gradually than initially planned due to the virus. And the company is winding down one of its most iconic aircraft: the humpbacked 747 jumbo jets. 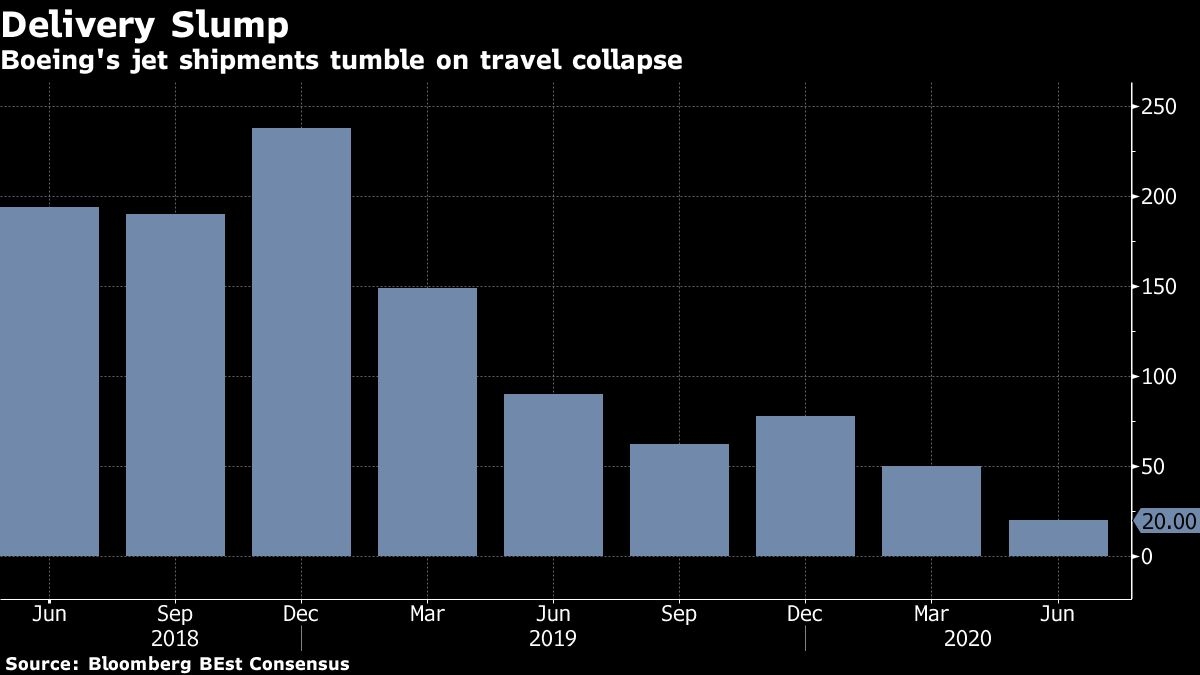 Executives are trying to resize operations for a market shrunken by the virus outbreak — but without cutting so deeply that Boeing’s recovery is damaged later this decade. The pandemic’s devastating effect on the outlook for jetliner sales is compounding the financial stress from the 737 Max, Boeing’s best-selling jet, which has been grounded since March 2019 after two deadly crashes.

“This is a true business transformation effort,” Chief Financial Officer Greg Smith said on a call with analysts to discuss Boeing’s earnings.

Boeing had previously announced a 10 per cent workforce reduction, or approximately 16,000 jobs. The total cut will still be about one-tenth of employees since Boeing is hiring for its defense and space business.

The shares fell three per cent to US$165.68 at 12:45 p.m. in New York, the biggest drop on the Dow Jones Industrial Average. Boeing tumbled 48 per cent this year through Tuesday, also the most on the Dow.

While the company’s free cash burn worsened to US$5.63 billion in the second quarter, that was better than Wall Street’s expectations. Analysts had predicted a drain of US$6.57 billion as the company cut costs and slowed work on key aircraft programs to save cash while demand crumbles.

Smith said he saw a path to positive cash flow next year. For that to happen, Boeing will need to start delivering the 737 Max while airlines are reluctant to add new planes. But appetites for additional aircraft could rebound sharply, particularly if one of the multiple vaccines under study bring the pandemic under greater control. 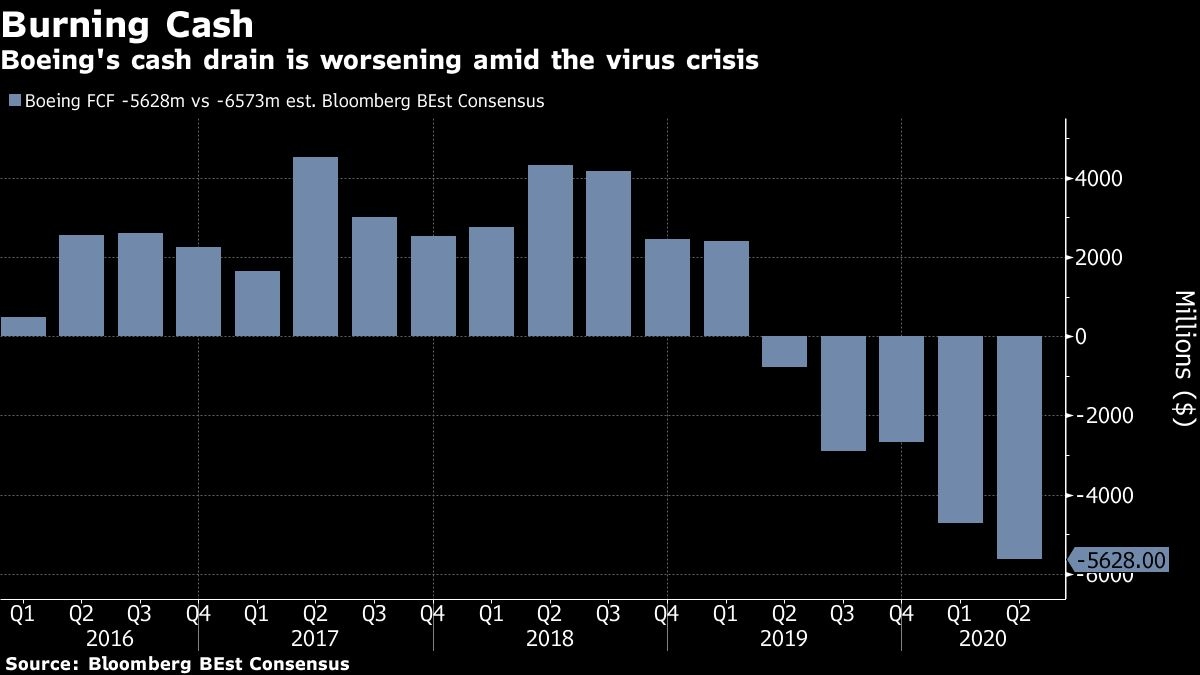 Investors had braced for an awful quarter after Boeing delivered just 20 commercial jets in the three-month period, down from 149 a year earlier. Sales plunged 25 per cent to US$11.8 billion, compared with the US$13 billion average of analyst estimates compiled by Bloomberg. Total debt soared to US$61.4 billion from US$38.9 billion at the end of the first quarter.

The company’s global services business was hit especially hard as cash-constrained airlines parked thousands of planes and accelerated retirement plans for entire fleets of aircraft types. The division reported an impairment charge of US$923 million on excess parts and inventory and severance costs.

The weakness in services and production “just a few months after the last update points to the softening markets,” said Ken Herbert, an analyst at Canaccord Genuity.

Regulators are making progress toward certifying the 737 Max, which in normal times would be the company’s biggest cash generator. But the surging virus has further delayed Boeing’s plans to win regulatory approval to return the jet to service, a milestone anticipated for later this year.

Boeing doesn’t expect to make much headway this year toward clearing the stockpile of about 450 jets built during the flying ban, which was imposed in March 2019 after two deadly crashes killed 346 people. Boeing paused production at its 737 plant for about four months through late May, as the grounding dragged on.

Boeing’s bill for the Max flying ban was already approaching US$20 billion before the pandemic struck. The company took another accounting charge in the quarter to reflect the US$551 million it expects to pay customers for lost flying and other considerations.

That liability is growing as more cash-strapped airlines seek to defer or cancel Max deliveries, or press Boeing to refund advance payments. The collapse in travel hit as the Max grounding passed the year mark, the point where contract provisions often allow airlines to ditch delayed deliveries without forfeiting so-called progress payments.

Max customers continue to walk away from earlier deals. The latest to do so is AerCap Holdings NV, the world’s largest independent leasing company, which revealed Wednesday that it was scrapping 15 of its 95 orders for the jetliner after customers canceled leases.

Another drag on Boeing’s results came from US$712 million in “abnormal” production costs after it halted and restarted the 737 final assembly lines. The manufacturer rang up an additional US$133 million in costs from temporarily shuttering plants around Seattle and in South Carolina because of the virus outbreak.

The company now has to contend with “the worst demand environment ever” weighing on its commercial and global services divisions, said George Ferguson, an analyst with Bloomberg Intelligence.

“Not only do you have to get the Max through certification — and I feel like they’re well on their way — but they have to shepherd a bunch of airlines through taking deliveries,” Ferguson said in an interview before the results were announced.