Boeing Co. rose after saying it still expects that the 737 Max will be cleared to fly this year and is planning a dramatic comeback for the beleaguered plane.

Output will rise 36 per cent to 57 jets a month by late in 2020, the company said in a statement Wednesday. The tab for the Max’s grounding climbed to US$9.2 billion during the third quarter, up by US$900 million, but the company said it didn’t see any major additional expense for customer compensation.

Boeing is trying to work through one of the biggest crises in its 103-year history after two deadly Max crashes killed 346 people in a five-month span and prompted a global flying ban in March. Boeing, which is under investigation by the U.S. Department of Justice and Congress, ousted its commercial-airplanes chief on Tuesday and stripped Chief Executive Officer Dennis Muilenburg of his role as chairman on Oct. 11.

The planemaker also revealed setbacks for two wide-body jet programs in an earnings release Wednesday. Boeing plans to pare output of its 787 Dreamliner to 12 jets a month by late next year from the current 14-aircraft pace amid trade tensions with China, a key customer. And the debut of the 777X has shifted to early 2021 from late next year as the company awaits delayed engines.

The shares advanced 1.2 per cent to US$340.99 before the start of trading in New York. Boeing has tumbled 20 per cent since the second Max accident on March 10, the worst performance on the 30-member Dow Jones Industrial Average. 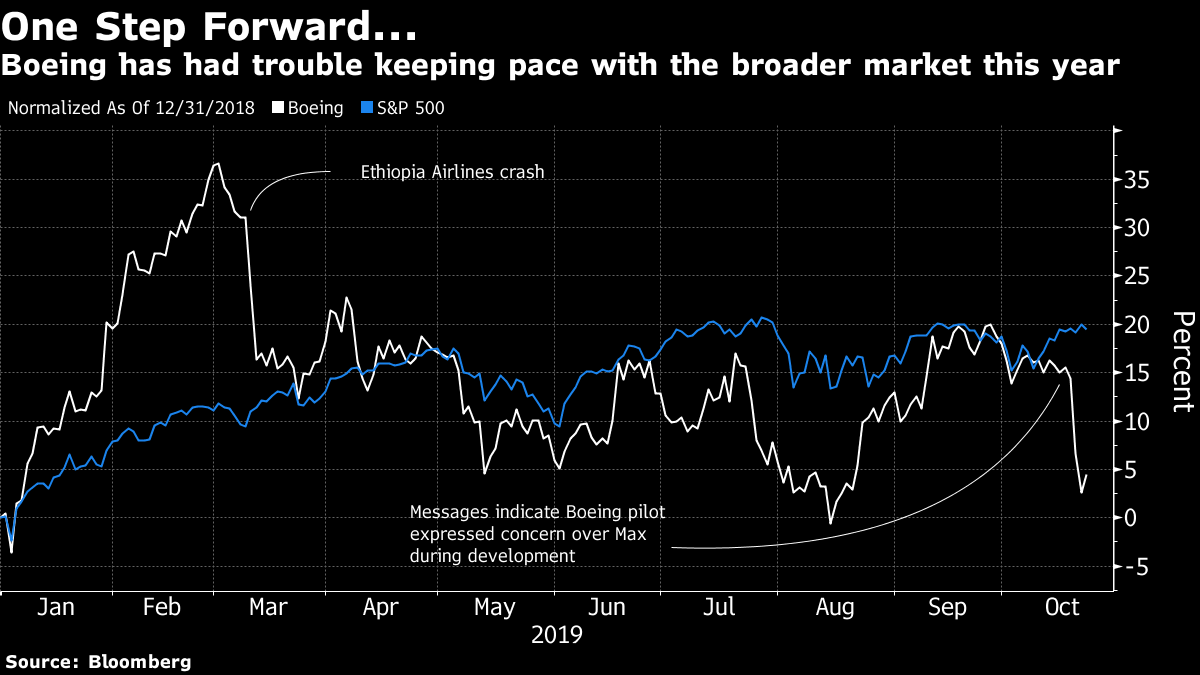 The latest update from Muilenburg on Boeing’s campaign to win over global regulators and prepare Max customers is more important to investors than the financial results, said Ken Herbert, analyst with Canaccord Genuity. The CEO is set to host a conference call for analysts and investors at 10:30 a.m. in New York.

“We believe expectations are low for the quarter and much of the sentiment on the results will revolve around Max commentary and expectations,” Herbert wrote in a report before the earnings release.

Shareholders were girding for disappointing results after Boeing only delivered 63 jets in the reporting period, down from 190 aircraft a year earlier.

Adjusted earnings fell to US$1.45 a share, compared with the US$2.17 average of analyst estimates compiled by Bloomberg. Sales tumbled 21 per cent to US$20 billion, compared with analysts’ expectation for US$19.7 billion.

Boeing burned US$2.9 billion in free cash, after generating US$4.1 billion a year earlier.

“Boeing will need to sustain themselves, as one of the biggest generators isn’t generating cash,” George Ferguson, analyst with Bloomberg Intelligence, said in an interview prior to earnings.

The cash drain will continue as long as the Max is barred from commercial flight. Airlines don’t expect to fly passengers on the plane until next year.

--With assistance from Richard Clough, Molly Smith and Anny Kuo.