Boeing Co. (BA:UN) aims to clear its 737 Max for flight as soon as October. But the planemaker also is plotting how it would respond to a far worse scenario: a grounding that stretches months longer.

Complicating both efforts is the tightest U.S. labour market in half a century. With experienced mechanics and engineers increasingly difficult to hire, Boeing is pondering what once loomed as a last-ditch choice -- a temporary factory shutdown -- to preserve its workforce.

The Chicago-based company wants to avoid a potential unraveling of manufacturing expertise across a broad swath of North America as its recovers from the Max crisis. That’s the risk if large numbers of highly skilled workers from the 600 mostly U.S. companies building components for the jet were to move on to other jobs at a time of historically low unemployment.

The company is studying whether to pause Max manufacturing for a short, clearly defined period of time, according to people familiar with the matter. They figure that approach would conserve cash and be less likely to trigger widespread layoffs than imposing another factory slowdown.

Boeing officials won’t discuss the finer points of how they’d manage through a shutdown, including details like worker pay. But the idea is that coveted employees would prefer the certainty of a surgical shutdown to an open-ended period of slower production that could lead to layoffs.

“As we work to support the safe return of the 737 Max to commercial service, we continue to assess our production plans and invest in the health of our workforce, production system and supply chain,” according to a statement from Boeing. “The market for skilled workers is one of many considerations in our scenario planning processes. We’ll continue to support aerospace manufacturing jobs, which are vitally important to the U.S. and global economy.”

The 400,000 parts that go into each Max arrive in a tightly choreographed sequence timed, in some cases, down to the hour. But suppliers do regularly navigate stoppages telegraphed in advance, such as strikes, Boeing’s traditional year-end factory closure or rival Airbus SE’s August pause.

A temporary stoppage is just one of several options Boeing is scrutinizing while working to convince regulators, airlines and flight crews that its marquee jetliner is safe after two fatal plane crashes killed 346 people and sparked global outrage. Executives say the Max is on track to be approved to resume commercial flight early in the fourth quarter.

If they’re wrong, the largest U.S. industrial company will eventually need to address its ballooning Max costs -- US$8.3 billion so far. By the count of George Ferguson, an analyst with Bloomberg Intelligence, Boeing has stored about 200 newly built 737s across several Western states. It can’t deliver them due to a worldwide flying ban imposed after the second crash in March.

Boeing, meanwhile, is helping suppliers navigate a financially stressful situation. As it slowed work in its factory by 19 pr cent in April, the planemaker held production at pre-crash rates for its two largest partners: Spirit AeroSystems Holdings Inc., which makes 70 per cent of the jet, and CFM International, a General Electric-Safran SA venture that makes its engines.

“Many suppliers have been shielded by Spirit and GE, but this is a finite lifeline,” said Stephen Perry, managing director with Janes Capital Partners, a boutique investment bank focused on aerospace and defense. “They can’t and won’t do it indefinitely. Same with Boeing.”

Suppliers were already struggling to retain their best mechanics and engineers. Aerospace workers are hard to come by with the Pentagon boosting defense spending and Airbus ramping up its new factory in Alabama.

Average hourly earnings for transportation-equipment employees have been rising faster than for other manufacturing workers, a key sign of high demand, according to Martha Gimbel, a New York-based economist who formerly worked at the Labor Department and Council of Economic Advisers. 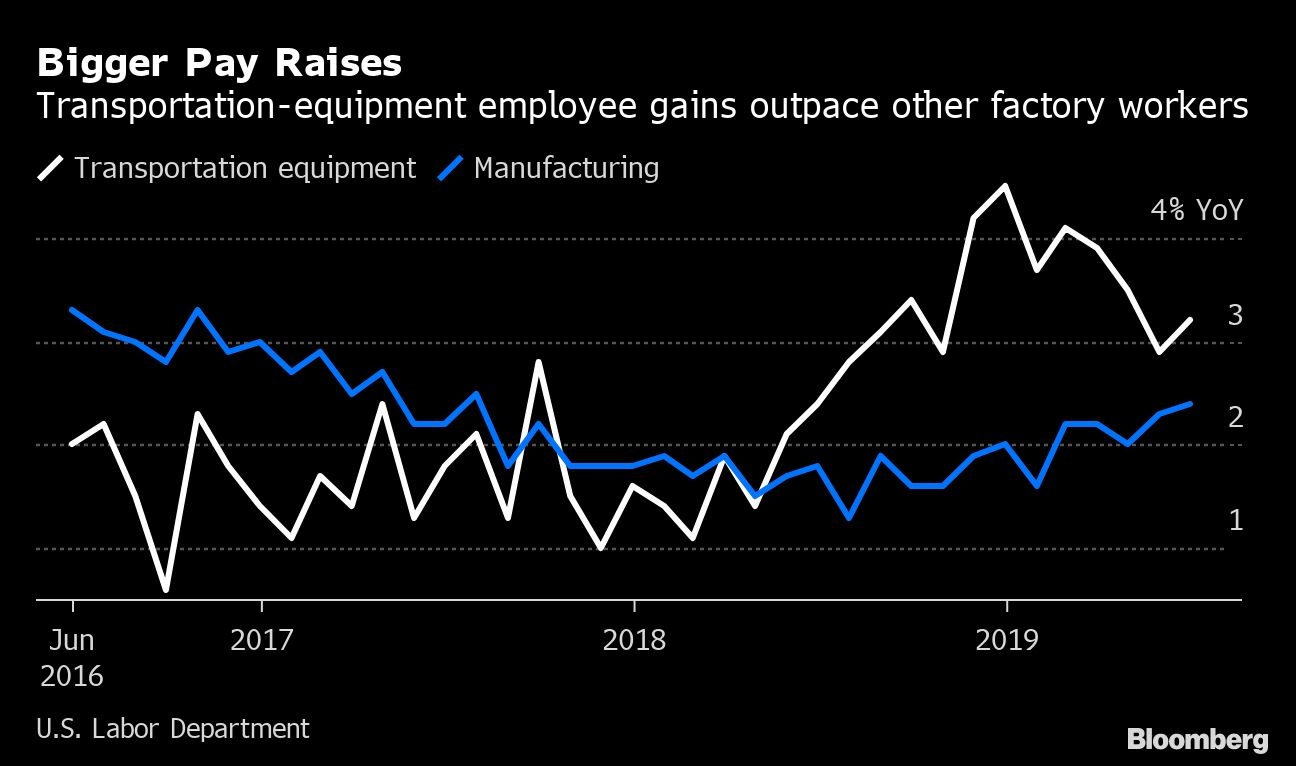 Certain types of engineers might be unable to keep working on planes if they leave, “but their skills will always be in demand somewhere,” Gimbel said. The uncertainty over the Max may prompt some to simply switch industries.

Dennis Muilenburg, Boeing’s chief executive officer, first raised publicly the possibility of a temporary factory shutdown or production cut last month, given the uncertainty over the timing of the Max’s return. One key labor leader for Boeing workers, Jon Holden, said that while he hasn’t been looped into planning, he has repeatedly warned company leaders of the risks from slowing or stopping the 737 assembly lines in Renton, Washington, a suburb of Seattle.

“Any thoughts of a temporary shutdown would negatively impact our community and the entire country,” said Holden, president of IAM District 751, the machinists union that represents about 30,000 Boeing workers in the Seattle area. “This type of setback would hamstring Boeing’s ability to ramp production back up to previous levels and beyond.”

If Boeing were to announce an open-ended production halt when the Max’s return to service is still in question, “it’s a phenomenally negative signal to the supply chain,” said Ken Herbert, a San Francisco-based analyst with brokerage Canaccord Genuity. “If you’re a smaller supplier, that could be irreversible.”

Worker shortages would add to the risk that the jet will act as a bigger drag on U.S. economic growth and the Dow Jones Industrial Average at a time when the White House and Wall Street are both worried about a recession. The manufacturer’s shares have tumbled 15 per cent since the second crash, on March 10, prompted the global flying ban. Other investors have felt every painful ripple, since Boeing’s nine per cent weighting is the heaviest among the 30-member Dow.

The 737 program generated US$23 billion in U.S. exports last year while providing about 90,000 jobs at Boeing and its suppliers, according to estimates by AlixPartners LLC. Boeing’s issues with the Max are large enough to “singlehandedly move the inventory outlook” for U.S. manufacturing, Wells Fargo Securities said in an Aug. 23 report.

“It is very important to the U.S. economy,” said David Wireman, a managing director and co-leader of AlixPartners’s aerospace, defense and aviation practice. If there’s any change in production rate, “the problem becomes what do you do about the employee base?” he added. “Do they settle somewhere else? What is the loss of learning to Boeing?”

The U.S. labor market is robust, with the unemployment rate and initial jobless claims both hovering around half-century lows, and wage gains are near the best level of the economic expansion.

The total number of positions waiting to be filled remains near a record in data gathered since 2000, according to the Labor Department. Total vacancies exceed the number of unemployed Americans by 1.37 million, also near a record.

The Federal Reserve’s anecdotal Beige Book survey offered a memorable sign of the historic tightness of the labor market in December. “A number of contacts said that they had been ‘ghosted,’ a situation in which a worker stops coming to work without notice and then is impossible to contact,” according to the part of the report from the Chicago district.

Spirit AeroSystems so far has avoided layoffs by adopting shorter work weeks over a 10-week stretch this summer. About 6,000 employees participated in the program, including salaried employees and CEO Tom Gentile. Ten unpaid furlough days are part of an initiative to trim expenses by five per cent -- the amount of sales Spirit lost when Boeing scrapped plans to speed Max production in the grounding’s aftermath, Gentile said during the company’s July 31 earnings call. Half of Spirit’s revenue comes from building Max fuselages in Wichita, Kansas, then shipping them 1,800 miles by rail to Boeing’s Renton plant.

So far Boeing hasn’t furloughed any of its own employees, instead using the grounding to recover from parts shortages that disrupted its factory last year. Once the revamped Max is certified for flight, Boeing wants to rapidly ramp up work on its biggest money-maker -- and expects suppliers to be prepared as well.

For those companies, the effects of the Max saga couldn’t be more stark and unnerving, according to Herbert, the Canaccord Genuity analyst: a pedal-to-the metal speed-up just weeks away or, perhaps, a devastating slowdown. “Everyone is nervous as hell,” he said.