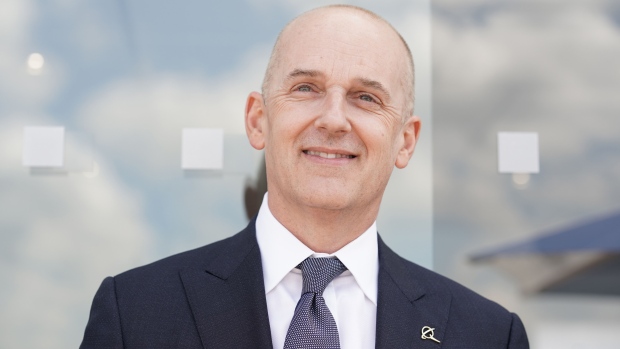 Greg Smith, chief financial officer of Boeing Co., during the 53rd International Paris Air Show at Le Bourget in Paris, France, on Monday, June 17, 2019. The show is the world's largest aviation and space industry exhibition and runs from June 17-23. , Bloomberg

(Bloomberg) -- Boeing Co. rose the most in a month after Chief Financial Officer Greg Smith said he didn’t intend to tap the debt market for additional liquidity again, as the planemaker maps out a path through an unprecedented collapse of air travel.

The company is husbanding cash to weather potentially “dire” scenarios as it navigates a market still reeling from the coronavirus pandemic, Smith said Wednesday at a virtual conference arranged by Jefferies. Liquidity remains a critical focus for investors given Boeing’s cash consumption and ballooning debt.

The Covid-19 crisis has upended global aviation and further complicated Boeing’s efforts to return its erstwhile cash cow, the 737 Max, to commercial service. The narrow-body model, Boeing’s best-selling jet, has been grounded almost 17 months after two fatal crashes killed 346 people. The pandemic has piled on pressure by undermining demand for other jetliners and forcing Boeing to burn cash at a record rate.

Smith’s views on liquidity helped buoy shareholders, with Boeing advancing 4.6% to $174.31 at 1:49 p.m. in New York after climbing as much as 6% for the biggest gain since late June. The shares had declined 49% this year through Monday, the worst loss among the Dow’s 30 members.

But Boeing still faces a long, uncertain recovery from the hole it’s in. Raising almost $40 billion of debt stabilized Boeing’s liquidity position for now, “yet key credit metrics are likely to remain strained,” Matthew Geudtner, a credit analyst with Bloomberg Intelligence, said in a report.

More than $20 billion of the manufacturer’s debt will mature through 2023, and its ratings risk remains “elevated” as the novel coronavirus “curbs aircraft demand and travel,” Geudtner wrote.

S&P Global Ratings said cash burn could total $19 billion and $20 billion, before Boeing reverses the outflows as the Max re-enters the market.

The ratings company revised its outlook to negative from stable for Boeing’s BBB- rating, only one notch above junk, citing the lingering effects of the pandemic. S&P also slashed its 2021 forecast for free cash flow by $4 billion, to a range of $5 billion to $6 billion.

“The negative outlook reflects that the impact of the coronavirus on aircraft demand could be materially worse or longer-lasting than we expect,” S&P analyst Christopher Denicolo wrote. “This could result in weaker cash flow over the next few years, making it difficult for Boeing to pay down debt.”

Smith outlined a path to reap cash from two of the aerospace titan’s biggest current drains, the Max and 777X. Boeing expects to start generating cash from the 777X after the wide-body jetliner enters the market in 2022 and transitions from development to full-rate production.

Meanwhile, teams are already rehearsing to begin deliveries of the 450 or so Max planes built during the flying ban, which is on track to end in the fourth quarter, Smith said.

Clearing its inventory of the undelivered Max will “continue to be the focus and priority,” he said. The company has a better idea of airlines’ ability to take on new aircraft after holding detailed talks with its customers by model and “time horizon” for deliveries.

Boeing is using the crisis to review “all aspects of our business,” from how jets are manufactured to the product lineup, Smith said.

A potential new aircraft family under consideration could build on work that went into a scrapped concept known as new midmarket airplane, or NMA, Smith said. Even amid the turmoil, the company has still poured $2 billion into capital expenditures and research and development this year, he noted.