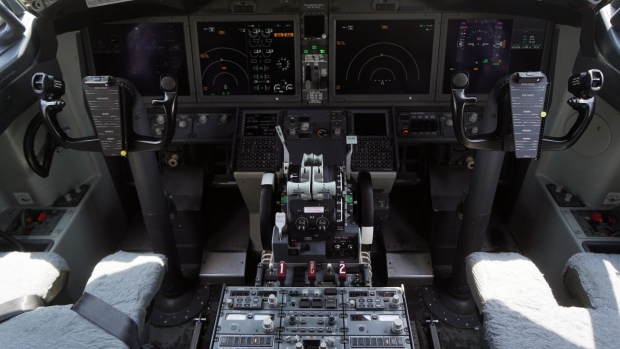 The cockpit of a grounded Lion Air Boeing Co. 737 Max 8 aircraft is seen at terminal 1 of Soekarno-Hatta International Airport in Cenkareng, Indonesia, on Tuesday, March 15, 2019. , Bloomberg

Before last month’s crash of a flight that began in Ethiopia, Boeing Co. said in a legal document that large, upgraded 737s “cannot be used at what are referred to as ‘high/hot’ airports."

At an elevation of 7,657 feet -- or more than a mile high -- Addis Ababa’s Bole International Airport falls into that category. High elevations require longer runways and faster speeds for takeoff. The Ethiopian airport’s altitude hasn’t been cited as a factor in the downing of Flight 302 and likely didn’t cause the crash. But it could have exacerbated the situation because an airplane’s performance degrades at higher altitudes, said a 737 pilot who flies into high-elevation airports such as Denver and agreed to speak on background since he’s not authorized to talk with the media.

Data released last week from the Ethiopian Airlines flight indicated the pilots didn’t cut the 737 Max 8 airplane’s speed after takeoff when they should have. The preliminary report on the disaster said the plane’s anti-stall system pushed the nose of the plane down less than two minutes into the flight because of a malfunctioning sensor. The pilots struggled to control the plane as it hurtled toward the ground at 575 miles per hour.

“The faster the airplane is going, the more force of air there is on its wings and control surfaces which requires more force on the pilots’ part to pull the control” column, said Robert Mark, a commercial pilot and senior editor with Flying Magazine.

Boeing cited the performance of the 737 Max 8 in a case brought before the U.S. International Trade Commission in 2017. Boeing charged that unfair competition from Bombardier -- which beat out Boeing for a large order from Delta Air Lines -- threatened its 737-700 and Max 7, the smallest of its upgraded single-aisle jets. By pointing out the limitations of the Max 8, the planemaker sought to preserve market share for the 700 and Max 7.

A Boeing spokesman said that Addis Ababa can handle large airplanes because it has long runways.

Boeing stated in a brief filed in the trade case that the “737 Max 7 has greater performance capabilities at challenging airports. In particular, the 737 Max 7 can serve certain ‘high/hot’ airports and has a greater range operating out of constrained airfields.” The brief then cites a number of such airports -- the names of which are redacted -- that the Max 7 can fly that “the 8, 9 and 10 cannot."

“Larger 737 variants cannot be used at what are referred to has ‘high/hot’ airports,” the brief stated. Certain U.S. airports are unsuitable for the Max 8 “due to a combination of short runway lengths, elevation, temperature, humidity and other environmental conditions."

Aviation consultant Bob Mann said airlines typically use a smaller, earlier version of Boeing’s jet, the 737-700, at higher elevations because that plane usually gets a “better rate of climb" than the Max 8.

Documents in the trade case referred to at least 16 U.S. airports considered “high and hot” and therefore unsuitable for the Max 8, though the names of those facilities weren’t made public. Asked during a trade commission hearing to specify which airports, an expert witness for Boeing replied that “sometimes Denver would qualify as that.” The expert, Jerry Nickelsburg, an adjunct economics professor at UCLA, added that “Mexico City certainly qualifies as that.”

Both the Denver and Mexico City airports sit at lower elevations than Addis Ababa and have runways as long or longer than the Ethiopian airfield, where they extend more than 12,000 feet, or 3,700 meters.

Hot airfields such as the Jakarta airport, from where the doomed Lion Air plane took off last October, produce similar air densities as high elevations, requiring faster takeoff speeds. Heat, air density and fast speed haven’t been cited as factors in that accident.

The performance of all airplanes deteriorates in high heat or elevation, and all pilots account for that before taking off, said Steve Wallace, former director of the Federation Aviation Administration’s accident investigation branch. Even airlines operating from Orange County, California, which is nearly at sea level, occasionally have to reduce weight on their planes because of high temperatures, Wallace said.

Altitude and heat may well have played no role in either 737 Max 8 crash, but the wording from Boeing’s 2017 trade case could still be seized upon by plaintiffs lawyers.

"Even if it is BS, plaintiffs’ lawyers will focus on the quote and put that back to the company to explain it," said long-time aviation attorney Roger Clark, who teaches aviation law as a visiting professor at Rutgers University in New Jersey.

Chicago attorney Thomas Demetrio, who is leading a lawsuit against Boeing for the Lion Air crash, said he wouldn’t include altitude or heat in a complaint unless investigators or one of his experts said those factors were a proximate cause.

All the factors that contributed to the Ethiopian Airlines crash won’t be known until sometime next year when the full investigative report is completed.

“It’s like a detective story right now,” said Mark, the commercial pilot. “And we don’t have all the data."