Boeing Co.’s 737 Max can safely return to the skies with an extensive package of fixes, after a scarring 20-month hiatus prompted by a pair of fatal crashes.

The actions, announced Wednesday by the Federal Aviation Administration, closed out the longest grounding of a jetliner in U.S. history and set the stage for other regulators to clear the Max, which would allow airlines worldwide to resume passenger service with the plane.

The FAA decision is a dramatic turning point for Boeing after more than two years of bad news surrounding its best-selling model. But the aircraft’s return won’t mean an immediate end to the controversy or a cash infusion for the company’s suffering bottom line.

A criminal probe by the U.S. Justice Department continues. Frayed relations with the FAA threaten to result in fines or other penalties and the Securities and Exchange Commission also has an open investigation. Meanwhile, the Covid-19 pandemic has crushed the airline industry, prompting airlines to cancel orders for the Max and thwarting Boeing’s plans to quickly reverse its losses.

“It’s Boeing’s most important program and the United States’ most important manufactured product, but you couldn’t ask for a worse market right now,” Richard Aboulafia, aerospace analyst with Teal Group, said before the FAA’s move. “It’s not a question of opening the floodgates and watching the cash pour in the way it would’ve been a year ago.” 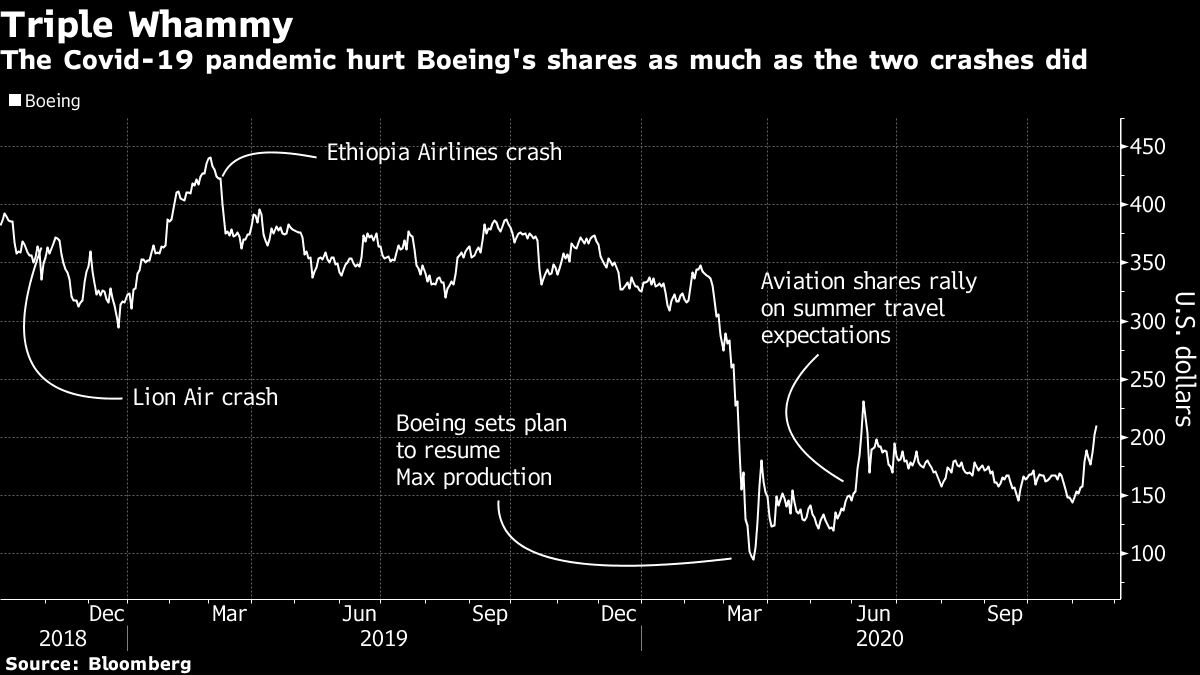 Boeing rose less than 1 per cent to US$211.64 at 1:16 p.m. in New York following the news, which had been expected for weeks. Through Tuesday, the shares had lost 50 per cent of their value since the March 10, 2019 crash of an Ethiopian Airlines Group flight that triggered the global grounding of the 737 Max.

FAA Administrator Steve Dickson said the plane that had roiled the reputations of the industry and his agency is now “the most heavily scrutinized airplane in transport aircraft history.” The accidents forced the FAA to “reset” its relationship with Boeing and to collaborate more closely with other nations, he said.

“The end result is that I’m fully confident the airplane is safe and I’d put my own family on it. It’d fly it myself,” Dickson said in an interview. The former airline executive and pilot flew a Max on Sept. 30.

Boeing Chief Executive Officer David Calhoun, who took control of the company during the Max crisis, said the company has learned “hard lessons” from the crashes and grounding.

“We will never forget the 346 victims,” Calhoun told employees Wednesday morning. “We will honor them by holding close the hard lessons learned from this chapter in our history to ensure accidents like these never happen again.”

The FAA is requiring repairs to a safety system that went haywire in the two crashes and multiple other flaws discovered during months of reviews. It also mandated new pilot training for the Max, focusing on issues that arose in the accidents.

The actions are unlikely to quell controversy surrounding the plane. Family members of those killed in an Ethiopian Airlines crash on March 10, 2019, some of whom have said the jet should never fly again, “reacted with sheer disappointment and renewed grief,” according to an emailed statement.

The Max’s comeback will be gradual. It won’t be widely flown for several months as airlines must first train pilots, inspect jets emerging from long desert sojourns and complete the FAA-mandated repairs. Of the U.S. operators, only American Airlines Group Inc. has put the Max jets back into its schedule, with flights starting Dec. 29 on a lone round trip: Miami to New York.

The Allied Pilots Association, which represents American’s cockpit crews, is “confident” in the plane and the new training regimen, said Pete Gamble, who led the union’s input for the Max’s return.

“This has been 20 months of deliberate looking at the process,” Gamble said of the training. “One thing about this airplane coming back -- it’s not a victory party. This is a lot of hard work that’s gone into correcting a problem where, unfortunately, people lost their lives.”

Southwest Airlines Co. plans to put its entire pilot workforce through the new training before reintroducing the Max, delaying the return by months.

CEO Gary Kelly said the airline is confident in Boeing’s fixes and that executives plan to fly in the jet before it is reintroduced to Southwest’s fleet. The airline faces “thousands of hours of work, inspections, and the software updates before any of our customers board a Southwest 737 MAX,” he said in a message to employees Wednesday.

United Airlines Holdings Inc., the other U.S. carrier with the Max, expects to resume service in the first quarter. It will have to perform more than 1,000 hours of work on each of its Max jets before they enter service, it said by email.

The largest flight-crew union in North America, the Air Line Pilots Association, called the fixes “sound” in a press release. The union said it is also requesting improvements to FAA’s certification process.

In all, there are 72 of the planes in the U.S. and another 315 at airlines in the rest of the world. About 450 additional Max jets were built by Boeing but haven’t been delivered, amounting to billions of dollars in inventory that the company will soon be able to start turning into cash.

The European Aviation Safety Agency has said that it is satisfied with the FAA-led review of the Max and is prepared to lift its ban soon. Canada and Brazil, which are also among the world’s leaders in aircraft certification, are also expected to take similar actions. At the insistence of EASA and Canada, Boeing is also working on longer-term fixes to improve the plane’s safety.

However, China, the first country to ground the jet and the main driver of growth in the industry, hasn’t given a clear timetable for its return.

The impact of the grounding has spread far beyond Boeing and is continuing.

The FAA, seen before the crashes as the preeminent aviation regulator, came under heavy criticism by other nations and Congress for its approval of the Max design. As a result of that and other reviews, the agency is in the process of adding layers of new oversight and requirements on planemakers it oversees, such as more thorough assessments of how pilots react during emergencies.

The U.S. House of Representatives on Tuesday passed a measure that would tighten FAA’s authority over employees at Boeing and other manufacturers who are deputized by the agency to sign off on designs, among other reforms. A Senate committee is considering a similar bill on Wednesday.

The 737 Max, an update of previous 737 models with more fuel-efficient engines, was grounded in the U.S. on March 13, 2019, three days after the Ethiopian plane went down.

Just as in an Oct. 29, 2018, crash on a Lion Air flight in the Java Sea near Jakarta, an automated flight-control feature known as the Maneuvering Characteristics Augmentation System activated during a malfunction. MCAS, which was designed to nudge the nose down in rare flight conditions, repeatedly dove the planes until pilots lost control.

The two crashes killed 346 people. A diver working on the undersea wreckage near Indonesia also died.

Boeing and FAA have settled on several changes to MCAS to ensure it can’t cause another crash. The system will only activate once. If it is triggered, its ability to dive is limited so that pilots can still control the plane manually. And, instead of being activated by a single sensor, it will only function if two sensors agree it’s needed. 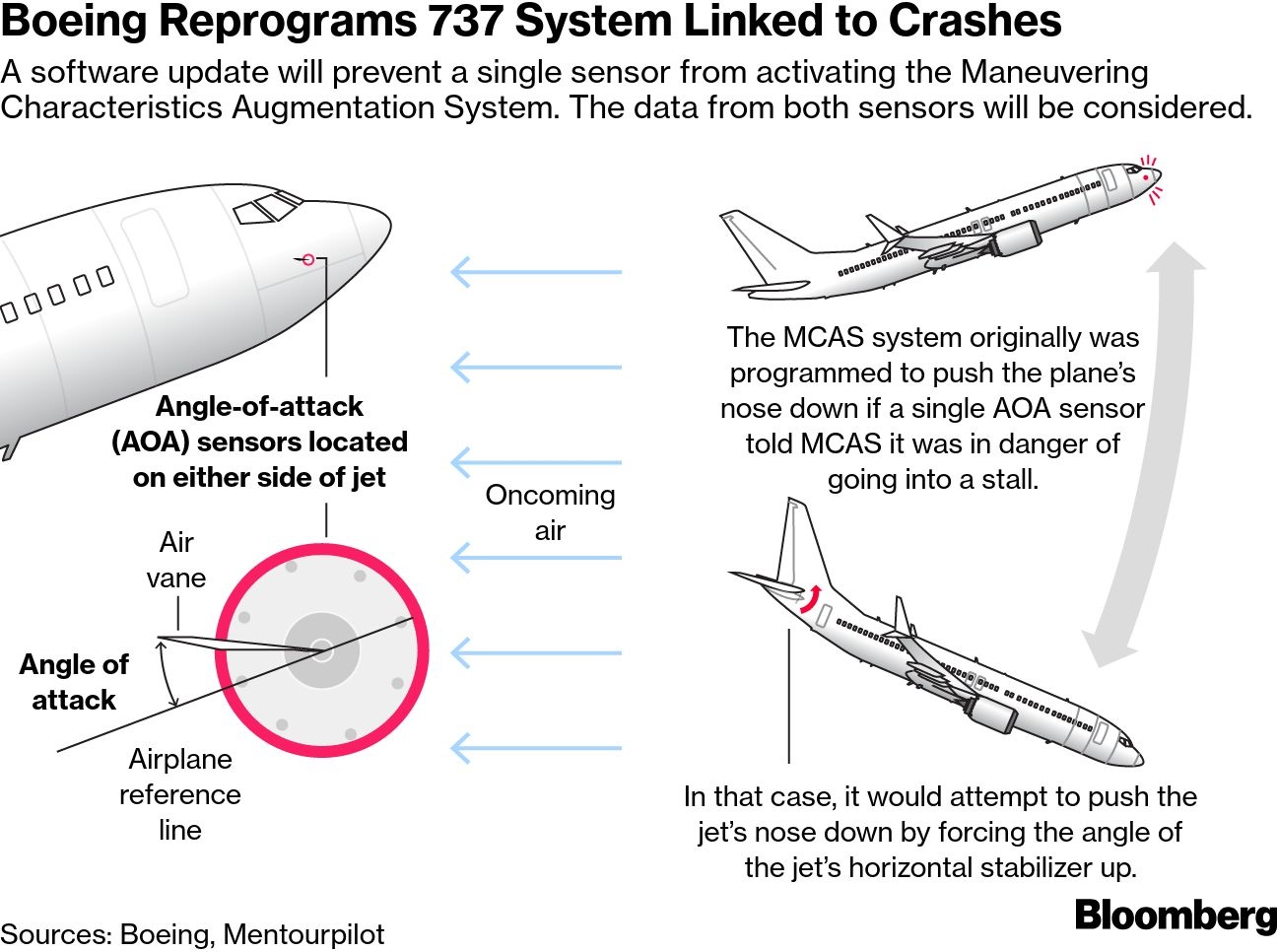 Pilots weren’t initially told that the system existed because Boeing concluded that they could easily disable it using an emergency procedure that had been in place for decades and was required to be memorized at some airlines.

However, the underlying sensor failure that triggered MCAS in both cases also prompted confusing additional warnings and loud alerts in the cockpit. The FAA and Boeing had issued instructions for how to handle such a failure after the first accident, yet the Ethiopian crew wasn’t able to do so.

Indonesian crash investigators and the U.S. National Transportation Safety Board concluded Boeing and the FAA shouldn’t have assumed that pilots would quickly recognize how to respond.

In addition to MCAS, the FAA is also requiring numerous other changes to the plane after a torturous review process that at times prompted tension between the planemaker and its overseer, as well as foreign regulators.

Regulators required Boeing to complete a complex update to the Max’s flight-control computers so that they are more redundant. Changes were also mandated for the plane’s autopilot and wiring has to be rerouted to limit the risks it could cause a failure similar to what was seen in the crashes.

After rags and tools were found in many of the grounded aircraft, the FAA is also ordering inspections to look for such debris left behind during manufacturing. Partially as a result of lapses such as this, the FAA is using its own inspectors to sign off on the safety of newly built planes. It had been routine for Boeing employees to conduct such approvals.

Originally one of the chief selling points for the plane was that pilots trained to fly on the previous family of 737s, known as Next Generation, wouldn’t have to complete costly simulator training before transitioning to the Max.

Now, every pilot will have to undergo simulator training on the Max, including how to handle issues that arose during the crashes.

For Boeing, which faces at least US$20 billion in Max-related costs, the crisis became one of the worst in the company’s century-long history.

Several senior executives were forced out, including then-CEO Dennis Muilenburg.

Now, with the collapse in air travel, airlines that had been clamoring for the more-efficient Boeing jets suddenly are fighting for survival and looking to postpone deliveries. Executives warned last month that the company will burn more cash than it generates until 2022 and that it will take at least a year beyond that to clear the mothballed Max aircraft out of its inventory.

“No one needs any jets for growth and the market is going to stay very soft for a number of years,” industry analyst Aboulafia said.

How consumers respond to the airplane is also uncertain. John Mowry, managing director with Alton Aviation Consultancy, said the company has begun to refer to the jet by its model number, such as the 737-8, more frequently in press releases -- perhaps a sign that over time the Max brand will eventually go away.

“I don’t know if it will be some big, splashy rebranding or if the Max name will just slip into oblivion,” Mowry said in an interview prior to the FAA’s announcement.

--With assistance from Mary Schlangenstein and Justin Bachman.