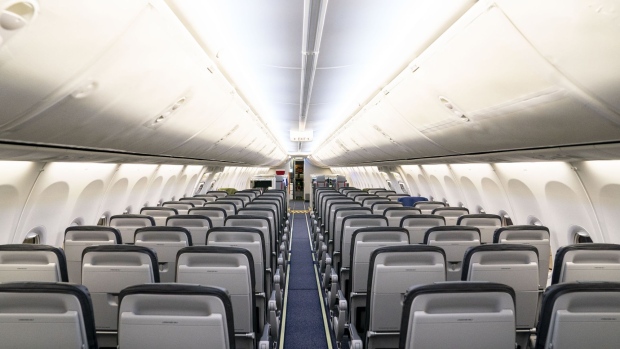 The interior of an Alaska Airlines Boeing 737-9 aircraft during an event showcasing the latest updates in the ecoDemonstrator program at Boeing Field in Seattle, Washington, U.S., on Monday, Sept. 27, 2021. Boeing Co. is studying how to incorporate sustainability improvements into aircraft design, production, maintenance and recycling in preparation for its next commercial airliner, said Mike Sinnett, vice president of product development for Boeing Commercial Airplanes. Photographer: David Ryder/Bloomberg , Bloomberg

Boeing Co. forecasts that commercial aviation should be back to 2019 levels in two to three years, buoyed by a strong domestic recovery in China and parts of Europe, the U.S. planemaker’s China head said.

Various countries’ vaccination rates and differing quarantine requirements will pose some hurdles but “we’re anticipating in the next two to three years that the aviation market will fully recover to 2019 levels,” Boeing China President Sherry Carbary said on the sidelines of Airshow China 2021 in the southern city of Zhuhai on Tuesday.

Carbary also said that Boeing was working very closely with the Civil Aviation Administration of China as it waits for its 737 Max model to be cleared by Chinese regulators.

China -- the first to ground the Max following the jet’s second fatal crash in Ethiopia in March 2019 -- still hasn’t lifted its ban, though a test flight was conducted in the country in August. Other markets in Asia including India and Singapore have cleared the model to fly in recent months.

“We’ve been sitting side by side, answering technical questions, and we’re going to continue to do that until the CAAC is comfortable that the Max can safely fly again,” Carbary said. “We’re answering all of their questions and in parallel, we’re staying close to our customers and helping them be ready to unground their airplanes and take additional Max.”

Boeing has bold predictions for aviation in China, saying earlier this month it expects Chinese airlines will need 8,700 new aircraft for a total of $1.47 trillion by 2040, doubling the country’s commercial fleet size as air travel booms.

China is keen to reduce its reliance on Airbus and Boeing and sees home-grown manufacturer Comac as key to that. Comac signed a deal with China Eastern Airlines Corp. last week to buy five C919 passenger jets. The C919 is comparable to the Airbus A320 and Boeing’s 737.

“I think it’s important to understand that China is the largest aviation market in the world,” Carbary said. “And there is plenty of room for all three manufacturers to support China for the near term and into the medium and long term.”

Boeing forecasts 1,720 freighter conversions will be needed over the next 20 years and of those, 520 will be widebody conversions with Asia carriers accounting for more than 40% of the demand.