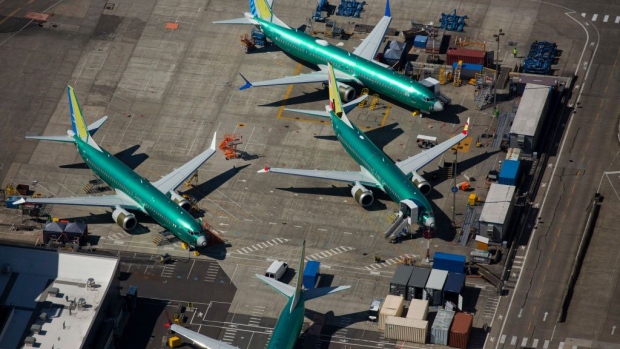 Boeing Co. plans to shut down its 737 Max assembly lines in mid-January and has begun handing out new work assignments to the 3,000 workers affected by the temporary production halt, the manufacturer told employees Monday.

The internal bulletin is the first to provide details of Boeing’s plans to keep its 737 workforce intact through an indefinite shutdown of the narrow-body jet that was announced late last month. Regulators banned the Max from flying after a March 10 crash, the second fatal accident within five months. The tragedies killed 346 people and plunged the largest U.S. industrial company into crisis.

Boeing faces a complex task managing the shutdown and eventual restart of the 737, one of its main sources of profit, amid the tightest U.S. job market in decades. The Chicago-based planemaker doesn’t expect to lay off or furlough workers because of the production suspension, Stan Deal, chief executive of Boeing’s commercial airplane division reiterated in a separate message to employees.

Within its Seattle-area manufacturing hub, Boeing plans to “loan” 737 mechanics, engineers and staff to the 767, 777 and 777X programs at its Everett wide-body factory. South Carolina employees who work on the Max’s propulsion systems will be shifted to the 787 program in North Charleston, Boeing said.

Other workers from Boeing’s 737 factory will help manage some of the 400 or so Max that the company has put in storage at an airport in arid eastern Washington, and at a new site that it’s opening in Victorville, California. The remainder will focus on initiatives at the factory where the Max is manufactured in Renton, Washington, including improvements to standard work processes.

Production will officially halt when the airplane with line number 7896 rolls out of the factory, Boeing said. The company told workers that it hasn’t decided when work will restart, citing uncertainty over the timing and conditions under which regulators eventually return the Max to service, and the training that will be required for flight crews.

The timetable has slipped repeatedly as regulators delved deeper into the jet’s flight-control systems and design. The latest issue, first reported by the New York Times, involves the risk of wiring bundles in the tail short-circuiting, prompting an emergency that might overwhelm pilots.

“We are working closely with the Federal Aviation Administration and other regulators on a robust and thorough certification process to ensure a safe and compliant design,” Boeing said. “We identified this issue as part of that rigorous process, and we are working with the FAA to perform the appropriate analysis. It would be premature to speculate as to whether this analysis will lead to any design changes.”