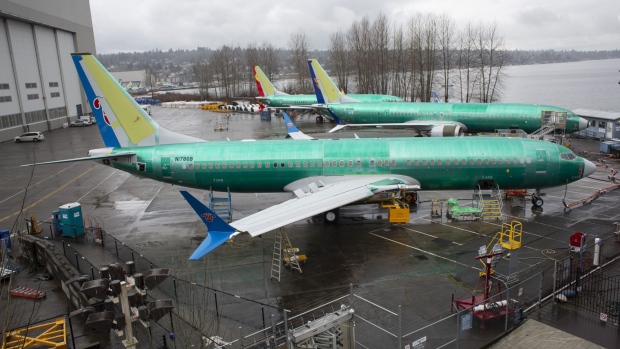 A 737 Max 8 plane destined for China Southern Airlines sits at the Boeing manufacturing facility in Renton, Washington in 2019. , Bloomberg

(Bloomberg) -- China is on the cusp of lifting an almost three-year grounding of Boeing Co.’s 737 Max, after the nation’s civil aviation body on Thursday issued an airworthiness directive for the single-aisle workhorse. The planemaker’s shares climbed.

The notice, posted on the website of the Civil Aviation Administration of China, removes the last safety related obstacle to bringing the Max back, and outlines steps airlines must take to begin flying it again.

“After conducting sufficient assessment, CAAC considers the corrective actions are adequate to address this unsafe condition,” the agency said.

A return in the world’s second-busiest aviation market would pave the way for a planned ramp-up in 737 Max production to at least 31 planes a month early next year from 19 today. A significant number of the 370 completed Max aircraft in Boeing’s inventory are earmarked for China and clearing them out over the next two years is key to bringing in cash and raising output further.

Boeing rose 3.7% to $195.18 at 9:47 a.m. Thursday in New York, retracing much of its drop in a broad rout Wednesday after the omicron coronavirus variant was detected in the U.S. The company’s shares were down 12% this year through Wednesday.

Safran said it is preparing for Boeing to lift monthly output to about 50 of the single-aisle jets in 2023. Based on figures from Boeing’s website, China accounted for about 20% of Max deliveries before the global ban that began in 2019 following two deadly crashes.

The airworthiness directive marks an “important milestone toward safely returning the 737 Max to service in China,” a Boeing representative said by email. The company continues to work with regulators and customers to restart flying, the company said.

China was the first country to ground the Max, in March 2019, following the two crashes and had held off approving its return long after the U.S. regulator lifted its ban in late 2020. Europe and others followed in subsequent months. India took a little longer before eventually giving the jet the green light to fly again in August while South Korea lifted its ban last month.

Chicago-based Boeing and U.S. Federal Aviation Administration officials traveled to China in July and a Max jet was flown to the nation in early August for a test flight in the skies over Shanghai later that month.

In an Oct. 27 earnings call, Boeing CEO Dave Calhoun repeated his expectation that the Max would be cleared to fly in China this year and that deliveries would resume in the first quarter of 2022.