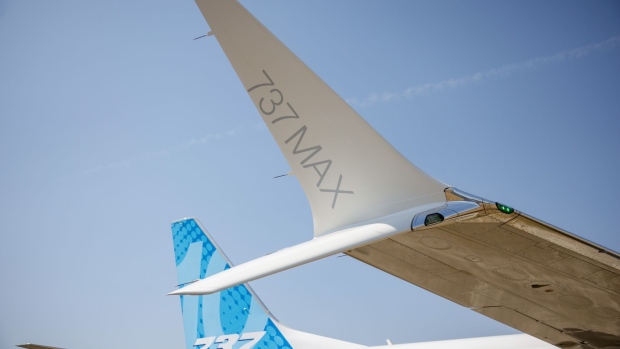 The wingtips of a Boeing 737 Max 10 on display on day two of the Farnborough International Airshow in Farnborough, UK, on Tuesday, July 19, 2022. The airshow, one of the biggest events in the global aerospace industry, runs through July 22. , Bloomberg

(Bloomberg) -- Boeing Co. doesn’t expect its 737 Max 10 model to be ready for certification until next summer at the soonest, US aviation regulators told a key lawmaker.

The planemaker’s latest plan was relayed in a letter Monday from Federal Aviation Administration acting Administrator Billy Nolen to Senator Roger Wicker, a Mississippi Republican. The comments provided the latest indication that the plane won’t meet a crucial deadline to finalize its approvals by the end of 2022.

Congress in 2020 had required that newly built airliners have more modern safety alerting systems in the wake of the twin fatal crashes on a similar plane, the Max 8, after assurances the last remaining 737 models would be cleared to fly by this year. But both the Max 7 and Max 10 models of the jet are in danger of missing the upcoming deadline, Nolen said. The jets face costly redesigns unless Congress acts to change the law.

“I support my team taking the time they need to fully understand the human factors assumptions” on the planes, Nolen said in the letter, which was reviewed by Bloomberg.

The prospect of a lengthy delay for the Max 10 -- Boeing’s only new offering in the hotly competitive midrange market -- adds pressure on the planemaker to forge a coalition of lawmakers willing to support extending the deadline. A leading critic, Representative Peter DeFazio, the Oregon Democrat who chairs the Transportation and Infrastructure Committee, is retiring later this year.

Asked at a press conference Tuesday what it will take to avoid having to redesign the planes, Nolen said, “Any change to any deadline is within the purview of Congress and it is up to them.”

Boeing declined to comment on the letter, referring instead to a prior statement that it’s “focused on meeting all regulatory requirements to certify the 737-7 and 737-10, and safety remains the driving factor in this effort.”

The planemaker’s shares climbed 4.8% at 10:52 a.m. in New York. The FAA letter was earlier reported by Reuters.