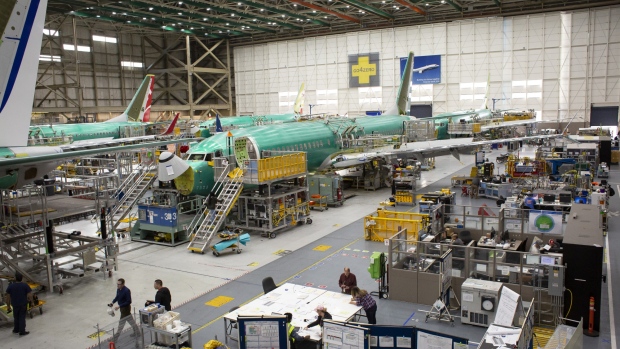 A Boeing Co. 737 Max airplane at the company's manufacturing facility in Renton. , Bloomberg

Boeing Co.’s (BA.N) plan to cut its 737 jetliner production by 19 per cent this year is expected to have negative spillover effects across the aerospace industry, from parts suppliers to engine makers and even airlines.

The planemaker on Friday said it would cut output to 42 airplanes a month by mid-April, as the company fights global criticism about the safety of its 737 Max jets after two tragic crashes that ultimately led to a grounding of the aircraft.

“The move to cut production to 42/month is surprising and will most certainly have an impact on the supply chain, considering many suppliers had been prepping for the rate to climb to 57/month in June 2019,” SunTrust Robinson Humphrey analyst Michael Ciarmoli wrote in a note to clients.

The analyst said Boeing’s suppliers cannot dial down production overnight, and changes to aircraft production rates usually take 12-18 months to flow through the supply chain. “Accordingly we believe suppliers will not be able to accommodate any Boeing request,” Ciarmoli said. Several companies, including Spirit AeroSystems Holdings Inc. and Allegheny Technologies Inc., have said they will maintain their current production schedules.

The S&P Aerospace and Defense Select Industry Index sank as much as 1.5 per cent on Monday, with Spirit AeroSystems and Triumph Group Inc. among the top decliners.

Here’s how Boeing suppliers and airlines may be impacted:

Spirit, which is one of the top Boeing suppliers, on Friday said it would maintain its 737 deliveries to Boeing at the current rate of 52 ship-sets per month, but that did not dissuade Wall Street analysts from sounding the alarm.

“Considering the grounding looks to likely stretch into second half of 2019, the move back up from 52/month for Boeing in 2019 will be a challenge, considering the number of Max aircraft it will have in inventory,” the analyst said. Spirit shares have fallen 13 percent since the Ethiopian Airlines crash, while Boeing is down 11 per cent.

The companies make the engines used in Boeing jets, via their CFM International JV. While CFM, like Spirit, has said it would not decrease the production rate for the Leap-1B engine, Jefferies analyst Sandy Morris said that decision could be revisited if 737 Max aircraft aren’t flying again globally by the end of September. “In the short term, the main risk is to free cash flow,” for Safran, the analyst said.

Separately, SunTrust analyst Michael Ciarmoli said engine makers will likely not be hurt by the production cut since the “engine supply chain was still playing catch-up and was about two months behind schedule.”

“This rate reduction will give the engine suppliers a bit of breathing room to play catch up and may also help to alleviate other bottlenecks in the supply chain,” Ciarmoli said.

The company’s aerospace unit has a large exposure to the Max program, and according to Wolfe Research, Boeing accounted for 31 per cent of sales for Collins Aero last year, spread across commercial and military segments.

“We would estimate the Max program at over $4 million per ship-set for United Technologies,” Wolfe analyst Nigel Coe wrote in a note. “If the production drop lasts 3-6 months, then this implies a relatively minor US$150 million to US$250 million sales impact.”

The analyst estimated 50 fewer 737’s will now be produced in 2019, down to 604 aircraft from his previous estimate of 654. He sees Spirit, Astronics Corp. and Triumph Group as companies with the most downside potential. He doesn’t expect Ducommun Inc., RBC Bearings Inc., TransDigm Group Inc., Curtiss-Wright Corp., Woodward Inc. or Barnes Group Inc. will see much impact.

The company, which makes replacement parts for jet engines, could be a rare bright spot amid the Boeing debacle, according to CL King analyst George Godfrey. “While the reduction in production could be a negative for Boeing’s suppliers, it also could be a positive for Heico, since fewer new planes means more older planes flying longer, and that will require more maintenance and service, as well as the potential for more PMA (Parts Manufacturer Approval) parts from Heico,” the analyst wrote in a note.

The airline has one of the largest exposure to 737 Max jets, and according to Raymond James analyst Savanthi Syth, service resumption may now take until the peak summer travel period. Previously it was expected around May.

Syth downgraded Southwest to market perform from outperform, and noted that Southwest’s current fleet plan calls for the retirement of twenty B-737-700s, which “could be delayed to make up for the shortfall and there are somewhat higher cost options such as purchasing or leasing used B-737s to help maintain schedules.”

The carrier has pulled 737 Max jets from flight schedules through June 7 and said there has been no revised 737 Max delivery schedule from Boeing yet.