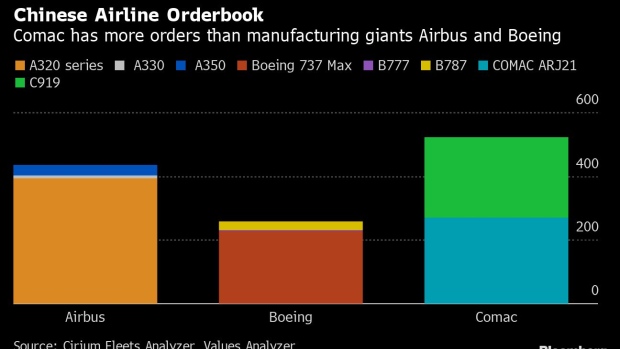 (Bloomberg) -- China has traditionally split aircraft orders evenly between Airbus SE and Boeing Co. Recently though, there’s been a shift against the American half of the world’s planemaking duopoly.

Boeing missed out on a 40-plane deal in September, following an even bigger hit in July, when China ordered nearly 300 Airbus aircraft worth about $37 billion at sticker prices. The misses reinforce how simmering US-Sino political tensions continue to complicate the dealmaking landscape for Boeing, which is also still waiting for its 737 Max to fly again in China.

Boeing, which hasn’t signed a major plane deal with China since 2017, took the unusual step of issuing a statement after the July Airbus order was announced.

“As a top US exporter with a 50-year relationship with China’s aviation industry, it is disappointing that geopolitical differences continue to constrain US aircraft exports,” Boeing said. “We continue to urge a productive dialogue between the governments given the mutual economic benefits of a thriving aviation industry.”

The agreement with Airbus for 292 aircraft from China’s big three state-owned carriers was one of the country’s largest-ever orders. The subsequent $4.8 billion deal in September was to supply 40 jetliners to Xiamen Airlines Co., a China Southern Airlines Co. unit that previously only operated Boeing planes.

Boeing did seal an order for up to 24 787s from Taiwan’s China Airlines Ltd. over summer, but that could end up hampering deals with mainland carriers due to the politically-charged nature of matters relating to Taiwan, which China claims is part of its territory. The order came shortly after a contentious visit to the island by US House Speaker Nancy Pelosi in August. More than two dozen members of Congress have visited the self-governing democracy this year, the most since at least 2013.

Airbus was the frontrunner to win the China Airlines order until the last moment, people familiar with the matter said, asking not to be identified because the negotiations were confidential.

“Boeing’s exclusion from the Chinese market is poised to extend amid a worsening US-China relationship, lengthening the company’s recovery timeline and crimping its outlook,” Bloomberg Intelligence analysts George Ferguson and Juan Chamorro wrote in a Sept. 28 note.

“Recent visits by US politicians to Taiwan have further strained relations, which were already challenged under President Donald Trump amid a debate over competitive practices and intellectual property,” they said. “The Trump administration’s trade deal aimed to equalize some of the imbalances, but was obscured by Covid-19 and not enforced by President Joe Biden.”

A longer-term rift threatens to put Boeing well behind Airbus, with deliveries already falling to a “negligible level” since 2020, according to Bloomberg Intelligence, which warned that a lack of sales in China will curb build rates and strain the US manufacturer’s supply chain.

Boeing still has 737 Max troubles in China, where its best-selling workhorse plane isn’t flying despite being cleared in most other major markets. China was the first to ground the Max after the model’s deadly crashes in Indonesia and Ethiopia in 2018 and 2019, and while the regulator has technically allowed commercial operations to resume, Chinese airlines aren’t rushing it back into the air.

Aviation data provider Cirium calculated that Chinese airlines have 229 Max planes on order, including more than 100 newly-built ones waiting in Boeing factories.

And now a Chinese aircraft manufacturer is trying to enter the fray, too. Commercial Aircraft Corp of China Ltd.’s C919 narrowbody was formally certified at an event in Beijing attended by President Xi Jinping in late September. That should pave the way for the company, known as Comac, to start deliveries. While there’s a long way to go before the C919 will threaten Airbus and Boeing single-aisle jets, Chinese airlines will likely help the jet’s prospects.

“Local airlines will certainly support China-built aircraft and grow the aircraft market share in the homeland gradually,” Herman Tse, a senior analyst at Ascend by Cirium, said. “The political tensions and trade war between China and the US have always been a risk to Boeing’s business.”

China and Comac will, in the long run, look to supplant all Western aircraft in Chinese fleets, according to Bloomberg Intelligence.

Airbus got a step ahead of its rival back in 2006, when it chose Tianjin, a municipality to the east of Beijing, as the site for a final assembly line. That has helped the company embed itself in China, producing from the facility about six narrowbody aircraft a month, which is about 10% of its total output for that type of jet. A decade later, Boeing announced plans for a completion center -- where 737 Max interiors are installed and planes are painted -- in Zhoushan, near Shanghai.

While planemakers can find delivery slots for major customers, Airbus’s jets are effectively sold out globally through 2026 and its backlog is 50% higher than Boeing’s.

“The last big deal that the Chinese have done, the Chinese airlines had, that was with us,” Boeing’s top salesman Ihssane Mounir told reporters at the Farnborough airshow in July. “Now they’ve done it with the competition, and the cycle will continue.”

As many as 1,743 Boeing jets have been delivered to China’s airlines over the years, and a strong relationship with Boeing is necessary to maintain them.

Boeing forecast in 2021 that Chinese airlines will need 8,700 new aircraft by 2040, valued at nearly $1.5 trillion. The country’s fleet size is expected to grow much faster that the world average, with almost 20% of new global demand coming from Chinese airlines, according to the company.

But China’s economy is faltering now, and the country’s draconian approach to Covid is weighing on spending.

At the Farnborough show, Mounir said the tumult in China was all part of a “long journey.”

“China will remain a very important market to us. We count on it,” he said. “Our relationship with our airline customers is very strong. We’re engaging with them.”