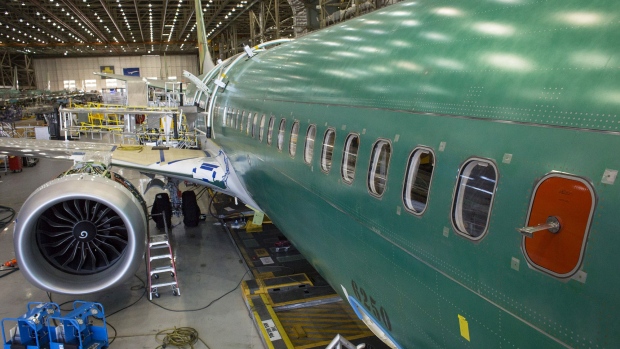 (Bloomberg) -- For Boeing Co., the pandemic was just one item on the long list of its existential concerns over the past four years. But after a massive talent exodus, the twin tragedies of its 737 Max jets falling from the sky, and stiff competition from rivals (on top of Covid’s blow to air travel), the company is gearing up for a production resurgence that will help mount the industry's steepest ramp-up in modern aviation history.

The comeback rides on whether a Boeing factory south of Seattle can pump out 31 of its cash cow Max jets each month, a goal set for early this year. It’s a breakneck acceleration — a 63% jump from the present pace — at a time when rival Airbus SE is also pushing the pedal to the floor. And then the real challenge will be to keep steadily moving higher.

But Boeing can’t do it alone. The risk is that the constellation of suppliers that ship millions of parts to planemakers and enginemakers won’t be able to hire enough workers to keep pace.  Those smaller manufacturers are facing labor shortages two years after U.S. aerospace companies jettisoned 57,000 employees. Already at the current low production pace, there are signs of stress and spot shortages. With an industry upturn looming, the crunch looks poised to get much worse.

Even after all the adversities Boeing has faced, “the next 18 months is more risky than the prior 18,” said Kevin Michaels, managing director of consultant AeroDynamic Advisory.

If the labor squeeze means Boeing can’t get the parts it needs, timed precisely to its production process, the company risks not only costly logjams but also the prospect of churning out scads of partially completed planes. Supplier disruptions famously forced Boeing to shutter production in 1997 and later left dozens of “ gliders” — jets lacking engines — stacked up around the Renton, Washington, plant during the last ramp-up in 2018.

About two-thirds of suppliers surveyed by RBC Capital Markets say the ability to staff up is the biggest risk to the aerospace recovery. Michaels estimates worker shortfalls of 10% to 20% are common. Concerns are particularly high for two foundries, Howmet Aerospace Inc. and Warren Buffett-owned Precision Castparts Corp., which produce the lion’s share of highly complex jet-engine components, like turbine blades able to withstand blast-furnace temperatures. The companies reduced headcount by 17% and 40% respectively during the downturn.

“The production rates that we’ll see over the next two to three years will be determined more by the supply chain’s ability to execute and finance growth” than air-travel demand, Michaels said.

Worker shortages are endemic in corporate America — from fast-food outlets to auto plants — but it’s an incredibly challenging problem to fill highly skilled jobs in aerospace. Trades like precision machinists require apprenticeships and years of specialized training before workers are deemed qualified.

The historically tight labor market and planning for the factory speed-up will be in the spotlight when the Chicago-based company reports earnings on Wednesday. Boeing is back in hiring mode two years after it cut about 20,000 jobs. And the manufacturer is carefully rehearsing suppliers for the long climb back to the pre-crisis peak, a 52-jet monthly pace for the 737 family. The planemaker has already embedded engineers in some potential bottlenecks.

Boeing Chief Executive Officer Dave Calhoun in October said hiring by its contractors will be a “critical watch item.”

“It’s incredibly important to them,” said Robert Spingarn, an analyst with Melius Research. “So many things have gone wrong. Some are self-inflicted, some are macro-driven, like the virus. Boeing has to be very focused on getting everything right across the company. They know it, investors know it.”

Boeing’s last few years have been unusually rough, thanks to the 737 Max grounding and the pandemic’s blow to aircraft sales. The company’s shares have slumped almost 40% since the end of 2019, a stretch that saw the S&P 500 climb by about a third. Meanwhile, rival Airbus had a more modest decline of about 18%. The European planemaker, which is pushing its suppliers to meet and beat pre-pandemic levels for its A320neo family by next year, was able to better weather the storm amid support from the French and German governments and lighter job cuts.

Building a 737 Max jet is like tightly choreographing an intricate ballet. Boeing must oversee the flow of the 400,000 or so parts that make up the plane, with arrivals sometimes timed down to the hour.

Hiking production is far more difficult than cutting back because of the complexity of getting those hundreds of suppliers to move faster in lockstep, Michaels of AeroDynamic Advisory said. Doing so requires pouring money into people and equipment months before purchase orders arrive.

To prepare for its acceleration, Boeing itself is hiring again. The planemaker has already recalled more than 2,000 machinists in the Seattle area who lost their jobs during the recent crisis, along with about 425 unionized engineers. The company has more than 5,000 other job openings in its largest manufacturing hub, and aims to fill thousands of unfilled positions across the U.S. with hiring initiatives, competitive wages and benefits, a spokesman said.

The U.S. manufacturer has also built a buffer of parts in inventory to help smooth the transition to higher rates, said Jeff Carpenter, director of Boeing’s raw-materials strategy.

“I feel like we’re set up pretty good,” he said. “Ramping up aerospace production is always a challenge. But we’ve put a lot in place to get ahead of it.”

From 2017 through 2019, aerospace employment soared to the highest levels in decades as Boeing and Airbus dialed up production. Those gains were largely erased as the pandemic brought global air travel to a standstill.

“The war for talent is because experienced people retired, left or were asked to leave,” said Alex Krutz, managing director of consulting firm Patriot Industrial Partners.

Key suppliers including partsmaker Howmet and enginemaker GE Aviation have already begun preparing for the coming boom. Howmet added about 800 people at its engine-products business during the second and third quarters.

GE’s jet-engine division globally has slated 900 new employees to start in the first quarter and has doubled its recruiting team, with an emphasis on attracting production workers, the company said.  As of mid-January, the GE division had more than 1,400 openings posted on its website. That’s more than a seven-fold jump from a year ago.Still, many longtime Boeing contractors are losing workers to larger parts-makers that can pay more, along with flashier aerospace entrants and distributors like Amazon.com Inc., said Patriot's Krutz.

Tool Gauge has held virtual job fairs, raised wages and even offered part-time work to lure retirees back into the Tacoma, Washington, factory where it produces metal and plastic components for airplane cabins. Jim Lee, the company’s general manager, would boost its 100 or so workers by 10%, if he could find any takers.

“The public’s nervous about companies that work in aerospace, because aerospace used to be such a great industry,” and then fell from those heights, Lee said. “And I mean ‘used to be,’ as in less than two years ago.”