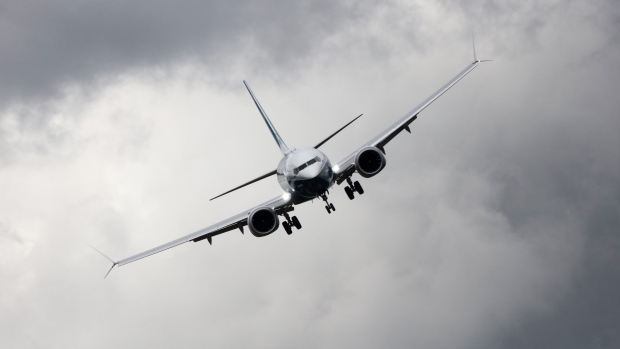 Three unions representing aviation safety inspectors said in a sharply worded report months before the Boeing Co.’s 737 Max was approved for use that the planemaker was given too much authority to oversee itself and that the new jet had safety flaws.

The new version of the decades-old 737 was approved with a vulnerable flight-control system and flaws in its fuel tank because Boeing (BA.N) and Federal Aviation Administration management overruled front-line workers, the report charged.

The report, obtained by Bloomberg News, didn’t raise concerns about a safety feature implicated in two crashes since October that killed a total of 346 people. There’s no indication the issues identified by the unions led to incidents. Boeing said in a statement that the plane was certified “in full accordance” with FAA procedures.

But the report took aim at a controversial FAA program encouraged by Congress that gave manufacturers such as Boeing more authority to approve their own designs. The agency wanted to transition its workforce of engineers, pilots and inspectors who assess new aircraft designs to focus on only the highest risk issues and on auditing the work of companies.

“The unions are concerned that the safety benefits of a second set of eyes provided by direct oversight of both domestic and foreign certification projects in high risk aspects of the certification process has not been recognized as an essential function within” FAA, the unions wrote in the report.

Leaders of the FAA and the National Transportation Safety Board, which is assisting in investigations of the crashes, are scheduled to testify Wednesday before a House aviation hearing.

While the FAA itself signed off on at least the preliminary design of the Maneuvering Characteristics Augmentation System or MCAS, which was driving down the noses of the two planes that crashed, some of the approvals were granted by Boeing employees designated to act as representatives of the FAA.

These so-called designees have become a lightening rod in the aftermath of the crash on Oct. 29 of a Lion Air 737 Max off the coast of Indonesia and an Ethiopian Airlines jet on March 10. In both cases, the MCAS system was repeatedly trying to push the plane into a dive. Neither crew managed to counteract the system and each eventually crashed.

The 737 Max, Boeing’s best-selling aircraft, has been grounded since March 13 as the manufacturer works on new software to address the accidents.

One of the areas under investigation following the accidents is how the FAA and Boeing categorized the risks of an MCAS failure. A malfunction of the system was deemed to be “major” or the more serious classification “hazardous,” depending on when it occurred during flight, according to the FAA.

MCAS was not categorized as “catastrophic,” the most severe condition that requires additional layers of protection. That classification is reserved for failures that can’t be countered by pilot actions and would lead to multiple fatalities.

Current and former FAA officials say that the process of using designated representatives of manufacturers isn’t inherently unsafe so long as its properly overseen. The FAA would have to hire 10,000 more employees and increase its budget by $1.8 billion if it didn’t rely on company employees, acting Administrator Daniel Elwell testified at a Senate hearing in March.

FAA unions oppose expanding the program because they say it gives too much authority to companies and that employees have an incentive to side with their bosses. While unions didn’t cite employment issues in their report, decreasing the role of company representatives could lead to more FAA jobs.

Among the issues the unions identified on the 737 Max, which was nearing certification in early 2017, was a rudder control system that lacked adequate redundancy, a refueling system that could lead to spills and fuel tank wiring.

The FAA investigated the issues after the union filed the report, it said in a statement. The agency declined to say what steps, if any, it took in 2017 to address the specific allegations because of the numerous investigations currently underway into the plane. In addition to reviews by FAA committees, Congress and the Transportation Department, the Justice Department is conducting a criminal probe of how the plane was certified.

The FAA has defended the certification process for the 737 Max, saying it was done according to long-standing practice.

All the issues identified by the union involved features on older versions of the plane that wouldn’t be permitted if the company was developing a model from scratch. When manufacturers such as Boeing update an existing model, the FAA has leeway to approve such designs if it finds that safety isn’t compromised.

The growing use of designated employees to assist in certification is part of the evolving philosophy of greater cooperation between the FAA and the companies it regulates, Boeing said in a statement.

“The long-standing collaborative engagement between the FAA, Boeing, its customers and industry partners has created the safest transportation system in the world,” the company said.

The 737 Next Gen models that preceded the Max family have one of the lowest accident rates of any modern jetliners, according to Boeing’s annual accident summary.