Boeing Co. closed the financial books on a tragic and tumultuous 2019 by revealing that total costs for its grounded 737 Max will surpass US$18 billion when the tab for restarting production later this year is included.

The planemaker is taking a US$2.6 billion pretax writedown to compensate airlines for ballooning losses from a global flying ban that’s expected to stretch to midyear. Deferred production costs also grew by US$2.6 billion, clipping the jet’s long-term profit potential, Boeing said in a presentation Wednesday. That’s on top of more than US$9 billion in Max-related costs already disclosed.

Adding to the barrage of bad news, Boeing notched its first annual loss last year since 1997, when it shut down assembly lines amid a supplier meltdown. Looking ahead, the company expects “future abnormal costs” of about US$4 billion as it slowly restarts Max production. That’s adding to the pressure on new Chief Executive Officer Dave Calhoun as he seeks to reset expectations and forge a recovery that in a best-case scenario will take years. 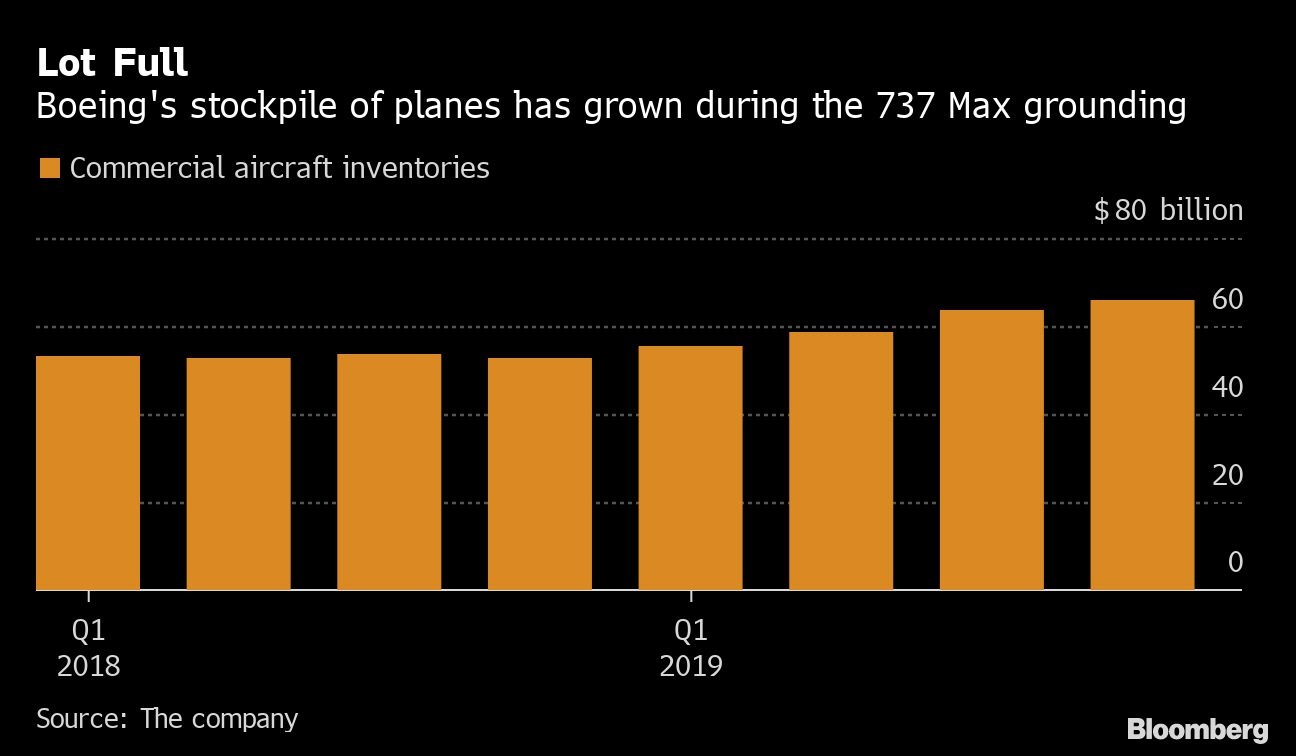 “We recognize we have a lot of work to do,” Calhoun said in a statement. He said the planemaker had the financial liquidity to follow a “disciplined recovery process” and is committed to “restoring the long-standing trust that the Boeing brand represents with the flying public.”

Boeing’s troubles went well beyond the Max in a quarterly earnings report that showed sales and profit plunging because of the crisis.

“I think he’s trying to grab all the bad news that he can, put it in the current period and then get on with life,” Bloomberg Intelligence analyst George Ferguson said before earnings were announced.

In one small bright spot, however, the company burned US$2.67 billion in free cash, which was less than expected by analysts.

Boeing climbed 2.5 per cent to US$324.61 at 9:35 a.m. in New York. Through Tuesday, the shares had fallen 25 per cent since an Ethiopian Airlines jet slammed into a field March 10, killing all on board and plunging Boeing into one of the worst crises of the modern jet era. That crash came less than five months after a Lion Air jet went down off the coast of Indonesia.

The Chicago-based manufacturer confirmed a Bloomberg News report last week that it plans a further cut in production of the 787 Dreamliner, to 10 a month early next year. And Boeing set aside US$410 million for an additional orbital flight in case NASA requires the mission after the company’s Starliner spacecraft missed a rendezvous with the International Space Station last month.

Calhoun, a General Electric Co. veteran and longtime Boeing board member, stepped into the top job on Jan. 13 after Dennis Muilenburg was ousted in December. The new CEO is working to shore up confidence in Boeing, which repeatedly missed estimates for the Max’s return last year.

The company suffered further embarrassment from internal messages, which sullied Boeing’s reputation for safety and engineering prowess. Calhoun, speaking Wednesday on CNBC, said his “stomach turned” when he saw the communications.

Debt and inventory costs are swelling as mechanics tend to 400 or so newly built jets that can’t be delivered until regulators clear the Max to fly.

During the earnings call, analysts will be listening for details about Calhoun’s priorities. Other question marks include the outlook for the Max’s regulatory certification, Boeing’s strategy for restarting production and the financial impact of the crisis, said Cowen & Co. analyst Cai von Rumohr.

“We think Calhoun is likely to choose cautious financial assumptions to avoid rolling resets that plagued prior CEO Muilenburg,” von Rumohr wrote said in a report earlier this month.

Boeing’s results marked a dramatic reversal from a year earlier, when the company surpassed $100 billion in sales for the first time in its history. In 2019, revenue slid 24% to $76.6 billion.

The new reduction in planned Dreamliner production further darkened the outlook for Boeing, which suspended its financial forecast last year because of the Max crisis. The company is managing its order backlog for the Dreamliner, another critical source of cash, more conservatively under Calhoun’s lead.

As announced last year, Boeing still plans to trim monthly output of the twin-aisle jet 14 per cent to 12 by the end of this year. The planemaker said Wednesday that it will make another cut next year to 10 a month as it deals with slowing sales and lingering effects from U.S.-China trade tensions.

The productionn rate of the carbon-composite plane will return to 12 a month in 2023, Boeing said.