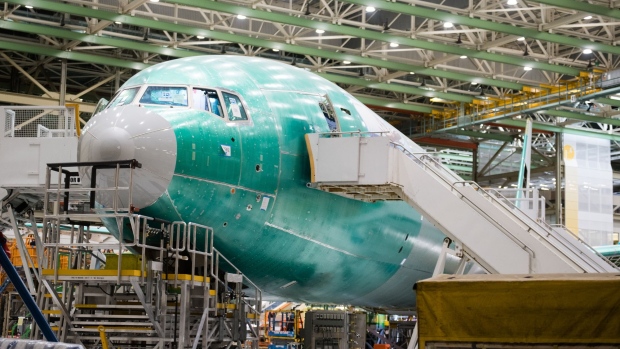 A Boeing Co. 777X airplane sits on the assembly floor at at the company's facility in Everett, Washington, U.S., on Wednesday, March 6, 2020. The Boeing 777X airplane is scheduled to make its first flight on January 23. Photographer: Chona Kasinger/Bloomberg , Bloomberg

China’s demand for wide-body aircraft is likely to account for 20% of global deliveries, according to the U.S. manufacturer’s Commercial Market Outlook. China’s civil aviation industry will also need more than 400,000 new personnel including pilots, cabin crew and technicians by 2040, Boeing said.

Read more: A Shortage of Pilots Looms as the Next Challenge for Airlines

“The rapid recovery of Chinese domestic traffic during the pandemic speaks to the market’s underlying strength and resilience,” Boeing’s China marketing managing director for commercial airplanes, Richard Wynne, said in a statement Thursday.

“There are promising opportunities to significantly expand international long-haul routes and air freight capacity,” he said. “Longer term, there is the potential for low-cost carrier growth to further build on single-aisle demand.”

Single-aisle jets will account for nearly 6,500 deliveries, while wide-bodies, including for cargo, will total 1,850 and account for 44% of demand by value, according to Boeing, which is still waiting for its 737 Max model to be cleared by Chinese regulators after most major markets approved it to fly again.