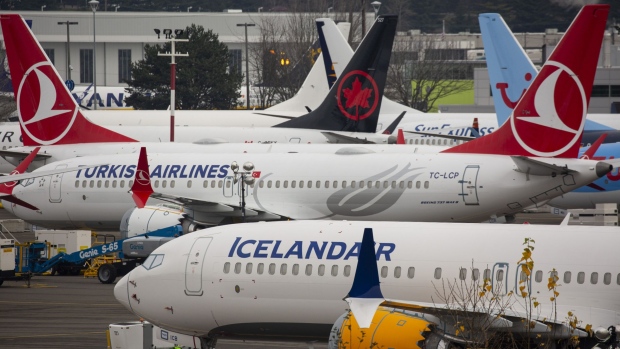 Boeing Co. said its grounded 737 Max won’t be cleared to fly until the middle of this year, at least six months later than previously anticipated, adding to the company’s financial burden.

The U.S. planemaker is resetting expectations as it addresses two recent setbacks for the embattled Max: a software flaw that will require more work than expected and an audit that found some wiring on the plane needs to be shifted. The final determination on when the Max will fly again remains in the hands of U.S. regulators, Boeing said in a statement Tuesday.

The worsening timeline deepens the challenge for Boeing as new Chief Executive Officer David Calhoun tries to repair frayed relationships with customers, suppliers and regulators. His predecessor, Dennis Muilenburg, was ousted in December as it became apparent that the company would miss its goal of recertifying the Max in 2019. The jet was grounded in March after the second of two deadly accidents that together killed 346 people.

The new delay will “reduce deliveries and increase Boeing’s reimbursements to airlines, which we believe will easily top US$10 billion,” Bloomberg Intelligence analyst George Ferguson said in a report. “Boeing will have to pay airlines for lost profit and the increased cost of training if simulator work is needed, as the airframer recommends.”

Every month the grounding drags on means a slower recovery for Boeing, which has halted production of the Max. More delays also signify growing costs to store about 800 of the single-aisle workhorses. Boeing has borrowed US$21.5 billion since the first Max fell from the sky in October 2018, and is seeking to add another US$10 billion in new loans.

The shares dropped 3.3% to US$313.37 at the close in New York, the biggest decline on the Dow Jones Industrial Average and the lowest closing price in more than a year.

The latest estimate “is subject to our ongoing attempts to address known schedule risks and further developments that may arise in connection with the certification process,” Boeing said. “Returning the Max safely to service is our number one priority, and we are confident that will happen.”

Boeing’s insistence that the jetliner will fly again caught the eye of Sash Tusa, an analyst at Agency Partners in London. But the Max’s order backlog of more than US$200 billion “means that any conceivable cost can be justified” to get the plane flying again.

“Actually we agree with Boeing on this one,” Tusa said. “It’s unlikely that there’s anything about Max that cannot be fixed.”

The FAA said it hasn’t set a time frame for completing work on the Max, which was expected to be Boeing’s largest source of profit when it debuted in 2017.

“We continue to work with other safety regulators to review Boeing’s work as the company conducts the required safety assessments and addresses all issues that arise during testing,” the FAA said in a statement.

Boeing’s latest estimate for the Max’s comeback contains a buffer for unexpected complications, said people familiar with the matter. The more conservative projection is intended to break from the overly optimistic assessments that Boeing provided last year and repeatedly missed, said one of the people, who asked not to be identified because the discussions are private.

If the Max does indeed return in the middle of 2020, Boeing’s best-selling jet will miss some or all of the busy summer travel season for the second straight year, compounding the pain for airlines. The three largest U.S. Max operators have already taken the plane out of their schedules through June.

“We will continue to assess any future schedule revisions on a rolling 30-day basis and make any potential adjustments accordingly,” said Brandy King, a spokeswoman for Southwest Airlines Co. The carrier, the biggest Max operator, has pulled the model from its schedules through June 6, resulting in as many as 330 weekday flight cancellations.

American Airlines Group Inc. reiterated that it continues to work closely with federal regulators on the re-certification of the Max. The plane has been pulled from American’s schedule until June 4.

Calhoun, a former senior executive at General Electric Co. and Blackstone Group Inc., stepped into the top job at Boeing on Jan. 13, emphasizing transparency and streamlined decision-making. His plans for turning around the company will be in the spotlight when Boeing reports fourth-quarter earnings on Jan. 29.

“Today the CEO moved the goalposts, and I hope he moved the goalposts a little further than they think it will be,” said Ferguson, the Bloomberg Intelligence analyst, of Calhoun’s effort to clear the Max’s comeback with regulators. “It seems like he’s trying to take some of the expectations off a February and March return, giving them room to get it done right.”