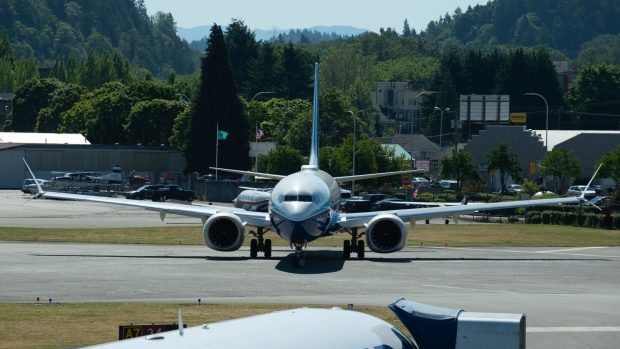 (Bloomberg) -- Boeing Co. is working with China’s regulators to clear the 737 Max to resume commercial flights in China by year-end and signaled that deliveries of the jet could resume soon to the plane’s largest overseas market.

Following a successful test flight in August, Boeing expects to restart Max handovers during the first quarter, Chief Executive Officer Dave Calhoun said during an earnings call Wednesday. That coincides Boeing’s plans to increase Max output to 31 jets a month, up from 19 currently.

China is the biggest country that is still grounding Boeing’s cash cow, about a year after U.S. regulators approved flight-computer fixes following two fatal crashes. The narrow-body plane, as a critical U.S. export, also is caught in a greater trade tug-of-war between Beijing and Washington.

The Chicago-based planemaker continues to “urge leaders in both countries to resolve trade differences by reiterating the mutual economic benefits of a strong and prosperous aerospace industry,” Calhoun said.

“Ultimately, America’s leadership in aerospace, as well as the health and stability of millions of commercial aerospace jobs” are at stake, he said.