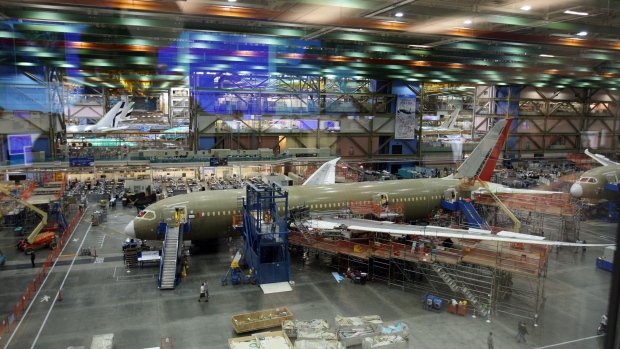 Employees work on the assembly line of the Boeing Co. 787 Dreamliner airplane, the first that will fly, at the company's manufacturing plant in Everett, Washington, U.S., on Thursday, April 30, 2009. Boeing Co. said it stopped work more than a month ago on two sections for the 787 Dreamliner after tiny wrinkles were discovered in the composite-material fuselages supplied by Italian vendor Alenia Aeronautica. Photographer: KEVIN P.CASEY/Bloomberg News , BLOOMBERG NEWS

(Bloomberg) -- Boeing Co. expects several thousand workers to retire or accept a buyout offer as the planemaker races to shrink its operations amid a historic unraveling of global travel from the coronavirus pandemic, said a person familiar with the company’s plans.

The manufacturer will start by offering the exit package in the U.S., while selectively hiring for critical programs such as defense and space, said the person, who asked not to be named because the discussions are confidential. Boeing is also weighing a production cut for wide-body jets as demand falls, although no changes have been made as yet, the person said.

Chief Executive Officer Dave Calhoun is walking a fine line by downsizing at a time when Boeing is considering whether to tap billions of dollars in federal aid to bolster cash reserves. Layoffs would give the planemaker more control over how it lowers the cost of its 161,000-strong workforce, but at the risk of stirring up a backlash from its critics in Washington.

“They need to cut costs with payroll, but they need to maximize leverage with headcount,” aviation consultant Richard Aboulafia said of the tug-of-war between Boeing’s cost-cutting news and its political interests. “My biggest concern is that when you have an announcement like this, it’s often the experienced engineers and designers who leave.”

Voluntary buyouts keep the government-assistance option viable, should Calhoun ultimately choose to pursue it. He has blanched at the potential strings attached as Congress seeks to limit job cuts in industries it helps. But the company has told Congress that the aerospace industry needs some $60 billion.

What’s not clear to anyone is the depth and duration of the slump. Calhoun warned that the company faced a “new reality” of a strikingly different jetliner market that will require a years-long recovery when the world emerges from the pandemic. Lingering in the air is whether the current belt-tightening measures will be enough.

“They will bridge us to recovery as long as we’re not confronted with more unexpected challenges,” he wrote to employees. “I can’t predict with certainty what the next few months will bring, but I can commit to being honest about what’s happening and doing everything we can to protect our people and our business through this crisis.”

Boeing sank 5.7% to $123.27 at the close of trading in New York, on a day when most stocks rose. The shares have tumbled 62% this year, the biggest drop on the Dow Jones Industrial Average.

The cost cuts will preserve much-needed cash at Boeing as airlines around the world slash schedules and park aircraft. About 44% of planes are in storage, according to data provider Cirium. And with global virus cases exceeding 1 million, there’s no telling when carriers will return to normal schedules, much less start buying jets again from Boeing and its European rival, Airbus SE.

Of the market shocks this century from the 9/11 terrorist attacks to the 2008 financial market meltdown, “This one is worse in a way because it is so sudden, so deep and so broad,” said Robert Spingarn, an analyst with Credit Suisse Group AG. “I can’t think of a time historically where traffic has virtually stopped overnight and there is no refuge.”

Even if the global economy pulls off a swift v-shaped rebound after the crisis, any return from the 70% plunge in airline capacity wouldn’t be immediate, he cautioned. A slower u-shaped recovery would heighten the pain.

“You’re going to have some reluctance to travel simply because people have gone through a tremendous scare here,” Spingarn said. “If we get into a u-shaped situation and have depressed traffic, I think there’s just multiples of the impact.”

Boeing is facing a particularly acute risk to its twin-aisle jets like the 787 Dreamliner and the coming 777X, as long-distance travel has been hit harder than shorter hops. Production of wide-body jets could tumble by 60% over the next three years, Jefferies analyst Sheila Kahyaoglu wrote in a March 31 report.

Executives will no doubt continue to evaluate whether deeper, involuntary layoffs will be needed, said Jeff Windau, an analyst with Edward Jones. But in recent weeks, “things have been changing constantly, so that almost every minute, you’re getting a different data point, a different view,” he said.

“That’s part of the huge challenge here,” for Calhoun and Boeing, Windau said. “They’re trying to scope out what’s the right level of workforce-to-demand over the next several months, and that’s a moving target.”