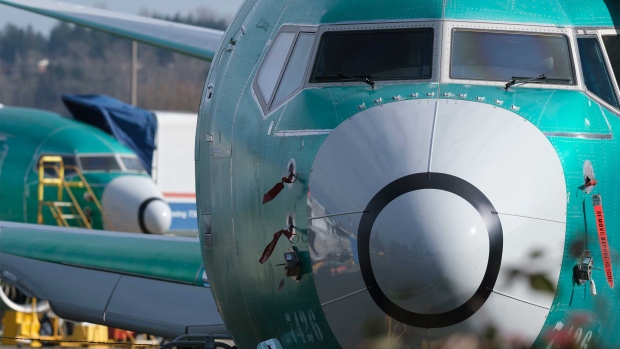 RENTON, WA - MARCH 11: A Boeing 737 MAX 8 is pictured outside the factory on March 11, 2019 in Renton, Washington. Boeing's stock dropped today after an Ethiopian Airlines flight was the second deadly crash in six months involving the Boeing 737 Max 8, the newest version of its most popular jetliner. (Photo by Stephen Brashear/Getty Images)s , Photographer: Stephen Brashear/Getty Images

Boeing Co. sold a business-jet version of its 737 Max in September, breaking a sales drought for a model that has been grounded since March.

The order by an anonymous customer was the first Max deal since June, when British Airways owner International Consolidated Airlines Group SA announced its intent to buy 200 of the narrow-body jetliners. That blockbuster agreement hasn’t yet been converted to a firm order, leaving net sales for the Max at negative 184 for the year.

The U.S. planemaker also finalized a deal with Air New Zealand for eight of its 787 Dreamliners last month, bringing net orders for the carbon-composite aircraft to 52 this year, according to Boeing data released Tuesday. The wide-body plane has been a rare bright spot for the company amid trade wars stoked by U.S. President Donald Trump and the crisis around the Max, which was grounded following two deadly crashes.

Boeing’s European rival, Airbus SE, has also been grappling with a weak market this year, with a total of only 127 net orders. But that was good enough to top Boeing, which has recorded 84 more cancellations than sales.

Both manufacturers face a “key risk” in maintaining production of their wide-body jets beyond 2021 amid indications of a glutted market for long-range aircraft, Bernstein analyst Douglas Harned said in a report Tuesday.

In 2020, Chicago-based Boeing will need to match its 2019 sales tally for the Dreamliner to avoid a steep cut in output from the record pace the company adopted earlier this year as crisis engulfed the Max. The Dreamliner has about 50 unfilled production slots starting in 2022, Bernstein analyst Harned said in a report.

In boosting Dreamliner output to a monthly pace of 14 jets, Boeing executives predicted a wave of orders to replace aging twin-aisle aircraft starting in the early 2020s. But the replacement opportunities aren’t sufficient to maintain production at that pace, Harned said.

Other factors could still support Dreamliner production, from the end of Airbus’s A380 superjumbo jet to a potential trade deal that restarts Boeing’s sales in China. Boeing could also offer discounts on the popular 787 to compensate Max customers for the disruption from the global flying ban.

“We have heard this is a concern for Airbus as it seeks to sell A330neos versus the 787,” Harned wrote.