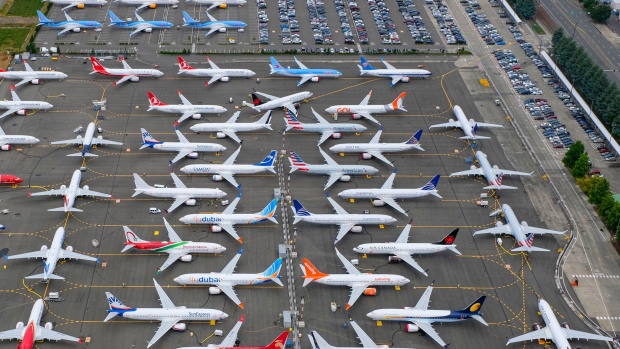 Boeing Co. unveiled the first and deepest of its planned job cuts, saying it would notify 6,770 employees in the U.S. this week that their positions would be eliminated.

The collapse in air travel sparked by the coronavirus pandemic has sapped demand for jetliners, forcing Boeing to scale back its commercial business, Chief Executive Officer Dave Calhoun said Wednesday in a message to employees. Cuts overseas will be communicated separately.

Calhoun warned last month that Boeing would need to cut 10 per cent, or about 16,000 jobs, from its workforce as many of the company’s best airline customers fight for survival. Rival Airbus SE also has been contemplating steep payroll reductions after announcing plans to pare output by more than a third.

“The COVID-19 pandemic’s devastating impact on the airline industry means a deep cut in the number of commercial jets and services our customers will need over the next few years, which in turn means fewer jobs on our lines and in our offices,” Calhoun told employees. “I wish there were some other way.”

Boeing gained 1 per cent to US$146.23 at 12:14 p.m. in New York. The stock has plunged 55 per cent this year, the worst performance in the Dow Jones Industrial Average.

The company plans to pare its workforce over several months through natural attrition and several waves of job cuts, a spokesman said. Another 5,520 U.S. employees have been approved to leave voluntarily with severance packages and will depart Boeing in the next few weeks.

The Chicago-based manufacturer had told union officials that layoff notices will go out Friday, and some managers have already begun alerting employees that they will lose their jobs, according to the union that represents about 18,000 engineers in the Puget Sound region. About 1,300 members were accepted for buyouts, a spokesman for the labor group said.

Boeing is seeing some “green shoots” toward an eventual recovery, Calhoun said, noting that bookings are starting to outpace ticket cancellations at some airlines.

The planemaker meanwhile is taking steps to restart production of its 737 Max jetliner, which has been halted since January as Boeing works with regulators to end a 14-month global grounding following two fatal crashes.

Boeing’s defense business will continue to hire for projects that are deemed critical, and the company is reorganizing and streamlining its services division, Calhoun said.