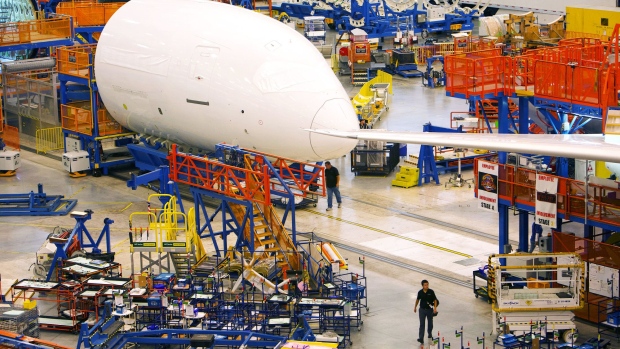 Parts for Boeing Co. Dreamliner 787 planes are seen on the production line at the company's final assembly facility in North Charleston, South Carolina, U.S., on Tuesday, Dec. 6, 2016. On the day President-elect Donald Trump lashed out at Boeing Co. for the cost of replacing Air Force One, mechanics and engineers at the planemaker's South Carolina factory were focused on another , Bloomberg

(Bloomberg) -- Boeing Co. is poised to benefit from a double dose of good news after months where few breaks went its way.

The aerospace manufacturer has averted -- for a few days at least -- an Aug. 1 strike by 2,500 machinists that would have crippled its St. Louis-area fighter-jet plants. And US regulators approved its plan to inspect and repair tiny structural flaws in Boeing’s 787 Dreamliners, a milestone toward resuming deliveries that have been largely halted since late 2020.

While the machinists only extended talks through Wednesday, the pause buys the aircraft maker extra time to win support. Resolving the union conflict and getting the Dreamliner deliveries back on track may ease pressure on Boeing’s shares, which lost about 30% of their value in the 12 months through July 29.

Members of the International Association of Machinists and Aerospace Workers District 837 rejected an earlier offer from Boeing last week, with the union saying its priorities were wages, strengthening 401(k) retirement plans and eliminating a two-tier wage system.

The newly revised contract offer would provide an $8,000 lump sum that can be taken in cash or deferred to 401(k) plans while maintaining its existing Boeing 401(k) plan. It also would increase the hourly second shift pay differential and provide wage increases for everyone in every year of the contract.

“This new offer builds on our previous strong, highly competitive one and directly addresses the issues raised by our employees,” a Boeing spokesperson said in a statement on Saturday. “We are hopeful they will vote yes.”

The workers in St. Louis and St. Charles, Missouri, and Mascoutah, Illinois, build military aircraft including the F-15, F-18, T-7A trainer and the MQ-25 unmanned refueler. The union represents about 2,500 Boeing workers in the region.

The weekend effort to head off Monday’s potential strike came shortly after the Arlington, Virginia-based company received preliminary US clearance to restart deliveries of the 787 Dreamliner aircraft.

Boeing must still make required fixes and get FAA inspectors to approve each aircraft, the people said, asking not to be identified as the information hasn’t been publicly announced. While timing of delivery resumptions remains unclear, the company is aiming to begin in the week of Aug. 8, one of the people said.

A total of 120 of the jets, which retail for as much as $338 million, had been constructed but were parked and waiting for the FAA’s approval to resume sales to customers such as American Airlines Group Inc., according to Boeing.

“We will continue to work transparently with the FAA and our customers towards resuming 787 deliveries,” Boeing said in an e-mailed statement.

The resumption of shipments will mark a financial turnaround for Boeing after years of operational lapses that have frustrated customers, suppliers and investors. It will enable the company to start unlocking nearly $10 billion in cash tied up in Dreamliners stashed around its factories and in desert storage, according to Rob Spingarn, an analyst with Melius Research.

Boeing plans to gradually ramp up production as it reduces the inventory of undelivered 787s, Stan Deal, the company’s commercial chief, said in a July interview at the Farnborough International Airshow.