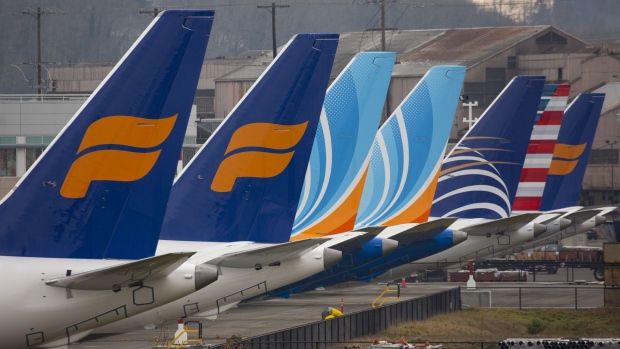 Woodward Inc. will combine its operations with Hexcel Corp. in an all-stock transaction that gives it a controlling stake in the merged entity, creating one of the world’s biggest aerospace and defence suppliers.

The transaction, which the suppliers to Boeing Co. and Airbus SE are billing as a merger of equals, will create a company named Woodward Hexcel with annual revenue of more than US$5 billion. While suppliers are hurting because of Boeing’s travails following the crash of two 737 Max planes, executives said Sunday they’re driven by the pursuit for more-efficient engines over the next 20 years, not the 737 Max issues.

“This was not dependent on a specific segment or a specific program,” Nick Stanage, who is chairman and chief executive officer of Hexcel and will run the new entity, said on a conference call.

Hexcel shareholders will get 0.625 of Woodward stock for every share held, the companies said in a statement Sunday. That values Hexcel at US$6.4 billion or about US$76.23 a share, based on Woodward’s closing price Friday, a 4.5-per-cent premium from Hexcel’s last traded price. Woodward investors will continue to own the same number of shares, or about 55 per cent of the combined company.

The new entity will be headquartered in Fort Collins, Colorado, where Woodward is based. Hexcel is located in Stamford, Connecticut.

Woodward shares have risen 60 per cent in the past year, with a price-earnings ratio of 26, while Hexcel has gained 21 per cent, with a valuation of 21 times earnings. The S&P 500 Index climbed 26 per cent during that period.

Hexcel slipped one per cent to US$72.18 in pre-market trading in New York.

The deal extends a years-long rush to consolidation within the defence industry. It’s the sector’s ninth merger of at least $1 billion announced over the past year, according to data compiled by Bloomberg. Woodward itself has previously been the subject of deal speculation, and in 2018 the company denied a Wall Street Journal report that it was in talks with Boeing.

“Overall, there is a consolidation trend in aerospace suppliers,” said Norbert Kretlow, senior analyst at Commerzbank AG. “This bears risk for airframers, both Boeing and Airbus. They have been able to forward price pressure to suppliers so far but the supplier’s consolidation should be a risk for this strategy.”

Boeing is halting production of the 737 Max while waiting for regulators to clear the planes to fly again, a decision that affects suppliers too. In October, Hexcel slightly trimmed its 2019 sales guidance in part because of the airplane’s grounding.

“Merger and acquisition activity has slowed because of uncertainty in the sector related to Boeing’s production freeze of the 737 MAX,” said Eric Reuther, investment banking head for U.S. industrials at CIBC Capital Markets. “However, we are also seeing some companies accelerate sales processes rather than stay on the sidelines to achieve greater certainty as they deal with significant changes in the supply chain.”

There are indeed other forces at work behind Sunday’s deal, the executives said on the call.

Sunday’s merger with Hexcel marks Woodward’s largest deal ever, according to data compiled by Bloomberg. Goldman Sachs & Co. advised Hexcel on the deal, while JPMorgan Securities LLC worked with Woodward.

--With assistance from Charlotte Ryan.